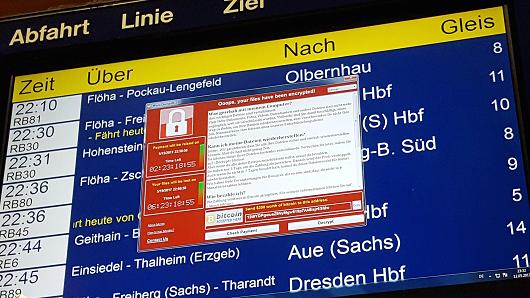 A window announcing the encryption of data including a requirement to pay appears on an electronic timetable display at the railway station in Chemnitz, eastern Germany, on May 12, 2017. A fast-moving wave of cyberattacks swept the globe, apparently exploiting a flaw exposed in documents leaked from the US National Security Agency.

Twice in the space of six weeks, the world has suffered major attacks of ransomware — malicious software that locks up photos and other files stored on your computer, then demands money to release them.

It’s clear that the world needs better defenses, and fortunately those are starting to emerge, if slowly and in patchwork fashion. When they arrive, we may have artificial intelligence to thank.

Ransomware isn’t necessary trickier or more dangerous than other malware that sneaks onto your computer, but it can be much more aggravating, and at times devastating. Most such infections don’t get in your face about taking your digital stuff away from you the way ransomware does, nor do they shake you down for hundreds of dollars or more.

Despite those risks, many people just aren’t good at keeping up with security software updates. Both recent ransomware attacks walloped those who failed to install a Windows update released a few months earlier.

Watchdog security software has its problems, too. With this week’s ransomware attack , only two of about 60 security services tested caught it at first, according to security researchers.

“A lot of normal applications, especially on Windows, behalf like malware, and it’s hard to tell them apart,” said Ryan Kalember, an expert at the California security vendor Proofpoint.