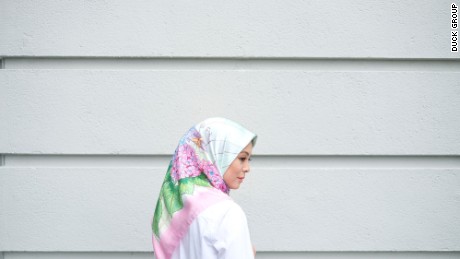 But a royal collaboration has thrust the nation into the sartorial spotlight.

Bright and colorful, the limited-edition scarves, sold to be worn as hijabs, celebrate female collaboration and empowerment.

“Muslim women are supposed to wear scarves. For me, it was always a forced thing. (Scarves are) something my mom’s generation never questioned but I think now, our generation is different,” Malaysian entrepreneur Vivy Yusof, 29, tells CNN of the way the royal line is updating a traditional form of dress with modern values.

A Malaysian fashion influencer with her own reality TV show and more than one million Instagram followers, Yusof is no stranger to celebrity.
In 2010, she co-founded e-commerce site Fashion Valet with her husband, Fadzarudin Anuar, to help Malaysians discover independent local designers.

The site boomed. Today it has 150 employees, sells 400 southeast Asian brands, and receives 1,000 orders a day on average.

Yusof distinguished Fashion Valet from competitors by focusing on local brands and commissioning designers to create pieces exclusively for the site.

Then in 2015, she founded her own line, dUCk, which specializes in colorful, high-end scarves aimed at urban women.

The chance to collaborate with royalty came when Princess Sarah attended a Fashion Valet pop-up event in Brunei’s northeastern Muara district in June 2016.

“The hotel staff told us: ‘Princess Sarah is going to come.’ So we were very nervous,” recalls Yusof. “Do we put out a red carpet? But she was just a normal human being shopping with her daughter.”

After the event, Yusof accompanied Princess Sarah to the parking lot, and impulsively asked her to collaborate on a line of headscarves.

“The worst she can do is say no,” Yusof remembers thinking. “She just smiled and didn’t say much. It was really crazy. I never thought that was actually going to happen.”

The princess was in.

Available in four colors, the scarf retails for $140.

“It turned into something that was more than a product … it symbolized something for all womanhood,” says Tengah.

In April, the Royal dUCk Scarf line officially launched at Brunei’s beachfront The Empire Hotel and Resort, where the princess gave an emotional speech.

“It was a really honest speech. It meant something and these women could relate to it,” says Tengah.

Princess Sarah, according to The Star Malaysia, framed the venture as a dialogue between two women.

“At the risk of underwhelming everyone, it honestly was just one woman to another being able to make a connection, each being able to relate to the other, being inspired and wanting to build more on each other’s perspectives and seeing where she would take us,” she reportedly said.

That ethos seemingly touched a nerve with female consumers.

“On the first day of the three-day pre-order period leading up to the launch, the (Fashion Valet) site crashed,” says Yusof. “People were so excited because it’s not normal in Brunei for a princess to collaborate with a fashion brand.”

Who is Princess Sarah?

In 2004, when she married into the royal family aged 17, it was the dubbed the “wedding of the year” in Asia, with heads of state from all over the world in attendance, including Singapore’s prime minister Lee Hsien Loong and the then Malaysian Prime Minister Abdullah Ahmad Badawi.

After marriage, the princess continued her education, reportedly graduating from university in Brunei with a bachelor’s degree in public policy, and serving as a cadet in the military.

“She is a person of high stature but she is relatable,” says Tengah. “I think that’s the general perception of her: that she’s down to earth.”

“What really shocked me about (Princess Sarah) is that she drives herself everywhere in Brunei. She doesn’t like to have a driver,” she tells CNN. “She picks up her kids from school and attends their events herself — I thought it was crazy.”

The princess’ relative transparency stands in contrast to other members of the royal family.

While Sultan Hassanal Bolkiah is known to keep a tight lid on family affairs, his status as one of the world’s wealthiest rulers, with a reported $20 billion as of 2011, is hardly a secret.
Furthermore, Princess Sarah is operating in a country that in 2014 made international headlines when it introduced sharia law.

The Islamic penal code punishes crimes such as sodomy with flogging and death by stoning, and its introduction was widely condemned by women’s activists around the world.

In Brunei, social media, independent designers and bloggers — such as Fadzil and Ajeeratul Abdullah, of Jeera Does Fashion — are driving the country’s fashion scene.
“These younger generations are very expressive,” says Tengah, who works for a sovereign wealth fund and was recently named a 40 Under 40 achiever by Chief Investment Officer magazine.

While outsiders might assume sharia law would limit fashion, Abdullah says that’s not the case.

“Sharia law in Brunei only touches on criminal offenses (and doesn’t affect fashion). Wearing a hijab is not compulsory, however, in the workplace, you are expected, but not obligated, to wear a headscarf if you are Muslim,” Abdullah tells CNN.

“Although there is an expectation of decency in line with our Islamic views, you can wear whatever you want.”

“I delayed wearing a headscarf for a long time,” says Yusof. “My mom is very conservative and kept asking me to cover up.

“But I didn’t think it was cool or international or urban, to wear a scarf. That’s why I wanted to give women a more fashionable option.”