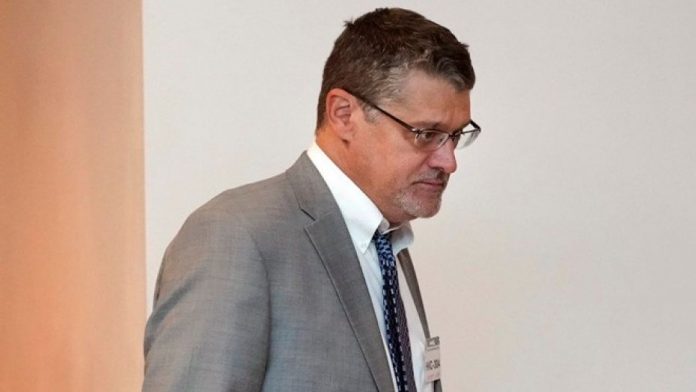 Glenn Simpson spoke to the House Intelligence Committee this past Nov. 14 .

The co-founder of the opposition research firm Fusion GPS told the House Intelligence Committee this past November that “people were arrested or died mysteriously” after the existence of the now-infamous “Trump-Russia dossier” was made public.

However, Glenn Simpson did not say whether those affected actually contributed information to the unverified dossier, which was compiled by former British spy Christopher Steele and which BuzzFeed published in January of last year.

“I do believe there was a bit of an old-fashioned purge,” Simpson told the committee, before adding, ” to my knowledge, it wasn’t anyone that helped us. I think it was more likely people who were taking the opportunity to settle scores or were falsely accused … and/or were sources of the U.S. Intelligence Community, not us.”

In August, Simpson’s attorney told the Senate Judiciary Committee that “somebody’s already been killed” as a result of the dossier’s publication, but did not identify who the person was.

The Committee voted unanimously Thursday to released the transcript of Simpson’s six-hour Nov. 14 appearance before the committee, one of three congressional panels investigating Russian actions during the 2016 presidential election campaign.

Simpson told the committee that he and Steele began shopping the dossier to media outlets in late October of 2016, after then-FBI Director James Comey announced that the Bureau was re-opening the investigation into Democratic presidential nominee Hillary Clinton’s private email server. He said he was “angry” that Comey, in Simpson’s view, had “violated the sort of one of the more sacrosanct policies, which is not announcing law enforcement activity in the closing days of an election.”

“We decided that if James Corney wasn’t going to tell people about this investigation … we would only be fair if the world knew that both candidates were under FBI investigation,” Simpson said.

However, Simpson denied that Fusion GPS leaked the dossier to BuzzFeed and told the committee he was “not happy” when it was published.

“I was very upset,” he said. “I thought it was a very dangerous thing and that someone had violated my confidences.”

In his testimony, Simpson described how Fusion GPS was retained by Perkins Coie, a law firm representing the Democratic National Committee and the Clinton campaign, in the summer of 2016. He said the committee was paid a “flat fee” of $50,000 per month, plus expenses to research Trump on the Democrats’ behalf.

“I’d say, in general, we were the architects of the research and we made most of the decisions about what to look for and where to look,” he said.

Simpson also detailed facts Fusion GPS claimed to have uncovered about the president while the firm was contracted by the conservative Washington Free Beacon to do research on then-candidate Trump and other GOP contenders for the White House.

“Various [Russian] criminals were buying [Trump] properties,” said Simpson, identifying one by the underworld name Taiwanchik. “I think he was running a — his associates were living in Trump Tower, ·and he was running a high-stakes gambling ring out of Trump Tower, while he himself was a fugitive for having rigged the skating competition at the [2002] Salt Lake Olympics and a bunch of other sporting events.”

“When Mr. Trump went to the Miss Universe pageant [in Moscow] in 2013,” Simpson added, “Taiwanchik was there in the VIP section with Mr. Trump and lots of other Kremlin biggies.”

The dossier made headlines for its salacious claims about Trump’s sexual proclivities, but Simpson denied that the firm had wanted to investigate Trump’s sex life, saying he “just didn’t think it was a useful subject to investigate.”

However, he added that the existence of such claims “is a big deal for Chris Steele … This is something he has dealt with his entire adult life.

“So I can’t tell you he wasn’t looking·for that, because it was probably something that was among the things that he would have asked someone to check,” Simpson said.

The committee’s top Democrat, California Rep. Adam Schiff, said in a statement that Simpson had made “serious allegations that the Trump Organization may have engaged in money laundering with Russian nationals …”

“Mr. Simpson … testified that if the Trump Organization did engage in money laundering with the Russians, it would be with the knowledge or approval of the Kremlin and constitute powerful leverage over the President of the United States,” Schiff added.

At one point during the committee interview, Simpson was asked the central question at the heart of the congressional investigations and that of special counsel Robert Mueller — whether the Trump campaign had coordinated with Russia to influence the outcome of the 2016 presidential election.

Simpson did not say yes or no, but said the patterns of behavior that emerged from the investigation raise questions.

“I think that the evidence that has developed over the last year, since President Trump took office, is that there is a well-established pattern of surreptitious contacts that occurred last year that supports the broad allegation of some sort of an undisclosed political or financial relationship between the Trump Organization and people in Russia,” Simpson said.

Fox News’ Brooke Singman and Alex Pappas contributed to this report, along with The Associated Press.