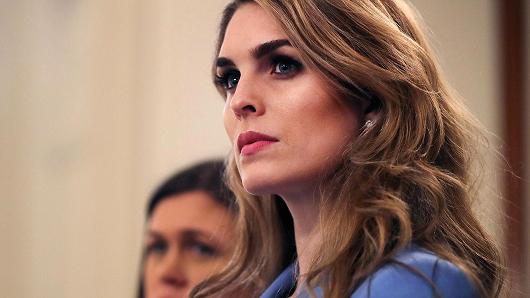 Trump issued a statement praising Hicks. He said she came to him about “pursuing other opportunities.”

“Hope is outstanding and has done great work for the last three years. She is as smart and thoughtful as they come, a truly great person. I will miss having her by my side but when she approached me about pursuing other opportunities, I totally understood. I am sure we will work together again in the future.”

Hicks, who rarely spoke publicly, had the difficult task of controlling the message from an often chaotic White House. For much of Trump’s presidential campaign she led its response to press inquiries, and the president reportedly had great trust in her.

Tensions had risen in the White House in recent weeks as chief of staff John Kelly aimed to crack down on access to highly classified information after domestic abuse allegations against Rob Porter, former staff secretary. Porter was one of numerous White House staffers operating under a temporary security clearance, and others like Trump’s senior advisor and son-in-law Jared Kushner recently had their clearances downgraded. Hicks reportedly dated Porter.