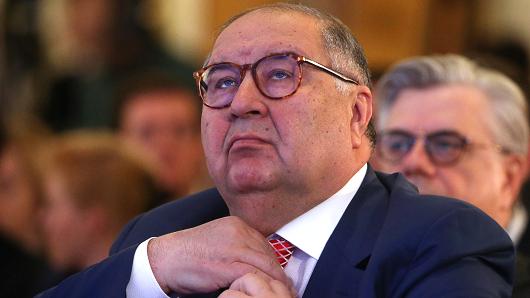 Russian billionaire and businessman Alisher Usmanov attends the plenary session of the Congress of Russian Union of Industrialists and Entrepreneurs (RSPP) on the slidelines of Russian Business Week in Moscow, Russia, March,16,2017.

A judge in the defamation case between Russian opposition leader Alexei Navalny and multi-billionaire Alisher Usmanov on Tuesday struck down motions to summon Russia’s prime minister to testify on his alleged wealth — the key issue in the case.

Usmanov, estimated to be worth $15 billion, has sued Navalny over his investigation into Prime Minister Dmitry Medvedev‘s alleged secret wealth.

Navalny, who made his name with a blog exposing official corruption, has published legal documents showing that the oligarch, along with several other Russian billionaires, transferred lucrative assets to a charity foundation run by Medvedev’s former classmate.

Medvedev has denied any connection to the property while Usmanov insisted that the transfer of the ownership of a luxurious mansion to the charity foundation was a bona fide business deal.

Street protests in dozens of Russian cities and towns in March, and triggered by the investigation, were some of the most widespread in years.

The judge at the Moscow district court dismissed Navalny’s motions to summon Medvedev and Deputy Prime Minister Igor Shuvalov to testify on the alleged connection between them and Usmanov. The judge also struck down Navalny’s motion to request the national property registry office to release the property deeds which he says prove the link.

“If tens of thousands took to the streets in Moscow, then Medvedev needs to respond to this,” Navalny told the court. “Medvedev should be held responsible for this, not Usmanov.”

Usmanov did not appear in court on Tuesday. Proceedings began cordially as Navalny snapped a selfie with Usmanov’s attorney, Genrikh Padva, one of Russia’s best known lawyers who used to represent former jailed oligarch Mikhail Khodorkovsky.

Usmanov’s foray into video blogging attracted countless online memes playing on the apparent likeness of Usmanov’s body language to that of Don Carleone in “The Godfather.”

The oligarch, whose business empire spans from mining to media, heads the International Fencing Federation and is a minority shareholder in the Arsenal football club in the English Premier League.