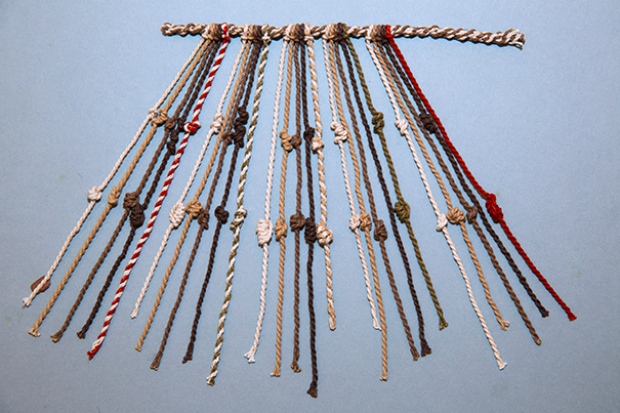 Instead of partying during his spring break, Harvard undergrad Manny Medrano stayed on campus and deciphered the meaning of an ancient Inca khipu.

Khipus are knotted string devices used by the Inca people to record information like censuses and tax records.

“For about a hundred years, researchers have understood that many of these artifacts — there’s about 1,000 of these khipus still in existence today — encoded mathematical data,” Medrano, 21, told As It Happens guest host Helen Mann.

But Medrano discovered that the ropes may, in fact, contain far more than just numbers.

His findings will be published in the January edition of the journal Ethnohistory.

‘A Rosetta khipu, if you will’

It all started when the mathematics major took an archeology class with Gary Urton, chair of the Harvard’s anthropology department and an expert in pre-Columbian studies.

Urton told the class about a recent discovery of six khipus that appeared to match up with information collected in a written Spanish census of 132 Indigenous villagers in a coastal Peruvian valley.

A model of Inca khipu knots is pictured. There are only about 1,000 of these record-keeping string devices left in the world. (Jon Chase/Harvard University )

By comparing the khipus to the document, Urton hoped to unravel more of the meaning behind the knotted ropes.

“What we’ve been looking for in those roughly hundred years of research has been to try to find a match — a Rosetta khipu, if you will — between a Spanish document and a set of these knotted artifacts,” Medrano said.

Medrano volunteered to help with the research over his spring break.

Then one day, alone in his dorm room, he had his Eureka moment.

Not only did the knots line up with the numbers in the written census — but the colours appeared to represent the names of the villagers.

“The matching game that was happening here was to try to count and grasp how many Felipes there are, how many Joses, and then to see if there’s a match between that and some form of the construction of these khipus.”

‘It’s really about reversing and pushing back against the course of history, in that the winners have always written it, and this is an opportunity to reverse that path.’
– Manny Medrano, Harvard student

What’s more, he suspects the style and direction of the knots may indicate other information about the villagers, such as their class and status in society.

“So these weren’t anonymous faces that we’re faced with,” he said.

“Instead, what we’re perhaps looking at is a census document in strings and knots that could encode and identify and categorize these villagers.”

Medrano has since switched his minor to archeology and plans to pen a thesis next year that combines the applied mathematics and the archeological components of his research.

“We are trained from an early age that math and language are two discreet worlds, and these artifacts really break that boundary,” he said.

But what really excites him is the opportunity to learn more about the history of the Inca as told from their own perspective.

“It was a moment of great discovery, but also a moment of realization these studies and this field is something that’s so much larger than me or any single person,” he said.

“Because it’s really about reversing and pushing back against the course of history in that the winners have always written it, and this is an opportunity to reverse that path.”