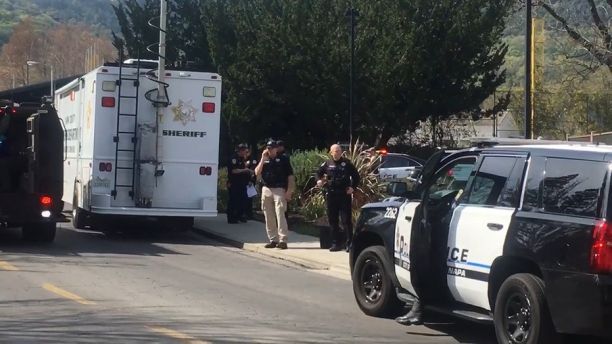 A gunman and three female hostages are dead after an hourslong “active shooter situation” at a California veterans home Friday.

Fox 2 in the San Francisco Bay Area reported that shots were fired at the Veterans Home of California in Napa County — the largest in the United States — near the dining hall Friday morning, prompting a swarm of police activity as officers looked for the active shooter.

He said all four bodies were found inside a room of the Pathway Home, a privately run program that treats veterans of the Iraq and Afghanistan wars with post-traumatic stress disorder.

Authorities said earlier Friday evening that they hadn’t had contact with the gunman for nearly eight hours since he slipped into an employee going-away party.

Authorities were not immediately identifying the suspect or the three women who were killed. Napa County Sheriff John Robertson told reporters Friday night that authorities were still working to notify their relatives.

Authorities have said that the women were employees of the Pathway Home.

Officials have said the suspect exchanged gunfire with a deputy at the center and took the women hostage about 10:30 a.m.

Responding deputies exchanged gunfire with the suspect, who was armed with a rifle. Authorities said at least 15 to 20 shots were fired in Building G, starting about 10:30 a.m.

Childs said hostage negotiators from at least three agencies were at the scene, attempting to make contact with the individual.

Brian Goder, a resident of the veterans home who was under lockdown for hours in the main dining room of the veterans home, told the Associated Press that he saw more than a dozen armed troops walking to the building in which the suspect and hostages are located. The soldiers could be seen in a video he posted on Facebook, but it wasn’t immediately clear what agency they were from.

In an interview with the AP, Larry Kamer said his wife, Devereaux Smith, a fundraiser for the nonprofit Pathway Home, told him by phone that the gunman had slipped quietly into an employee going-away party and staff meeting at the home. Some people were reportedly permitted to leave while others were taken hostage. Kamer said his wife is now inside the home’s dining hall and is not allowed to leave.

The California Highway Patrol has assumed primary investigative jurisdiction over the  situation because the veterans home is a state-owned facility, he said.

Napa County Sheriff John Robertson said authorities know who the suspect is, but he declined to provide a name. There were several attempts to make contact with the individual since 10:30 a.m. by both cellphone and phones in the facility, he said.

Robertson added that he knows none of the deputies were injured but did not have an official status on the condition of the hostages. The suspect did release some people, he said, but kept the three people he is currently holding. 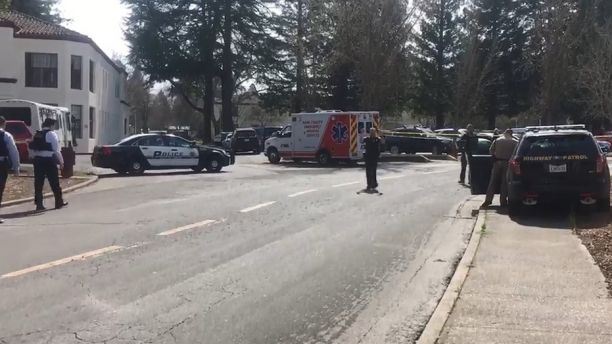 In all, 15 to 20 shots went off at the facility, police said, according to KTVU.

CHP Officer John Fransen told the outlet the sprawling property was evacuated after reports came in about an armed man on the grounds and law enforcement was working to build a secure perimeter.

“We do have an active shooter situation with a hostage situation in Yountville,” Fransen told KTVU.

A number of ambulances, fire trucks and an armored police vehicle were seen at the property.

Earlier in the afternoon, the Press Democrat reported that family members of workers and residents were at the scene, anxiously awaiting word. Fernando Juarez, 36, of Napa said his 22-year-old sister Vanessa Flores is a caregiver at the facility and was exchanging texts with family while sheltering in place with a client.

Flores told family she could hear people yelling “Get down! Get down!” She also asked her brother to ensure her 3-year-old son is taken care of if she should not survive the ordeal.

According to the California Department of Veterans Affairs, the Veterans Home of California in Yountville dates back to 1884 and is considered the largest veterans home in the U.S. with more than 1000 veterans from all wars dating back to World War II.

This is a breaking news story. Please check back for more information. The Associated Press contributed to this report.