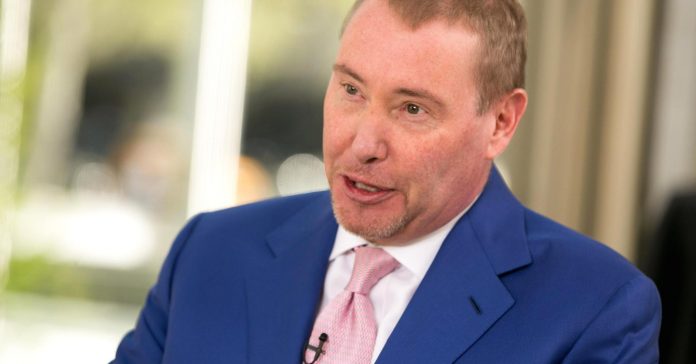 The best indicator of when the bull run in stocks will end could be coming in the bond market, DoubleLine Capital’s Jeffrey Gundlach said.

In fact, the “bond king” thinks that should the 10-year Treasury note yield hit 3 percent, that would be an ominous sign for all types of risk assets, including both equities and high-yield bonds. The government debt benchmark was within 0.15 percentage points of that level in Wednesday morning trading.

“My idea that the S&P would go down on the year would become an extraordinarily strong conviction as the 10-year starts to make an accelerated move above 3 percent,” Gundlach said Tuesday during a webcast, according to a Bloomberg report.

While most everybody else on Wall Street sees the market finishing higher at year’s end, the manager of the $51.8 billion DoubleLine Total Return Bond fund figures the S&P 500 will finish lower, potentially putting an end to a bull run that recently marked its ninth anniversary.

“My conviction on that is actually higher than my conviction right now on whether bond yields are going to break to the upside or downside,” Gundlach said, according to Reuters.

The flagship total return fund is off 1.1 percent year to date, but is outperforming its peers and is in the 10th percentile of Morningstar rankings.

Gundlach warned that the rise in bond yields would come with inflationary pressures that the Trump administration is disregarding.

An inflation scare briefly caused a stock market correction a month ago, though it quickly subsided. Average hourly earnings rose 2.6 percent in February, a decrease from the 2.9 percent January mark that began the market scare. Also, Tuesday’s consumer price index data showed headline inflation running at just a 2.2 percent pace, about in line with recent trends.

Investors also have continued to push money into both stocks and bonds.

Stock-focused funds have pulled in $108.4 billion in investor cash this year — though U.S. funds notably have lost $23.5 billion — while bond funds have seen just shy of $35 billion in new money, according to Bank of America Merrill Lynch.