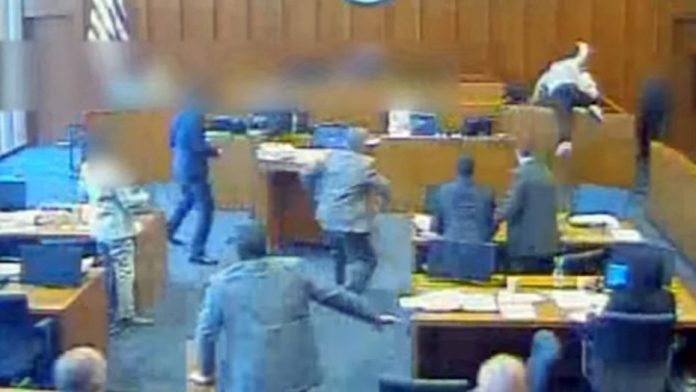 Siale Angilau, a 25-year-old member of the Tongan Crip gang, was shot dead while charging a witness during his trial.

Authorities in Salt Lake City on Monday released federal courtroom footage from 2014 that shows a U.S. marshal firing four fatal shots as a defendant armed with a pen charged a shackeled witness.

The video shows defendant Siale Angilau, a 25-year-old member of the Tongan Crip gang, rising casually from his seat beside his attorney during testimony. He grabs his lawyer’s pen.

Before any officers could react, Angilau sprints toward the witness and leaps onto the stand, wielding the pen with his right arm cocked.

The witness jumps back as Angilau falls feet-first over the front of the witness stand. The courtroom appeared in disarray during the 24-second video and a U.S. marshal, identified as “Jane Doe,” fired four shots at Angilau.

A woman cries out in horror while other law enforcement officers in suits run toward the witness stand. Angilau’s defense attorney jumps under a desk; prosecutors stand in shock.

“Drop the pen. Drop the pen out of your hand,” yells an officer standing over Angilau.

As U.S. District Judge Tena Campbell is escorted out of the courtroom, someone calls 911 at the end of the released video. 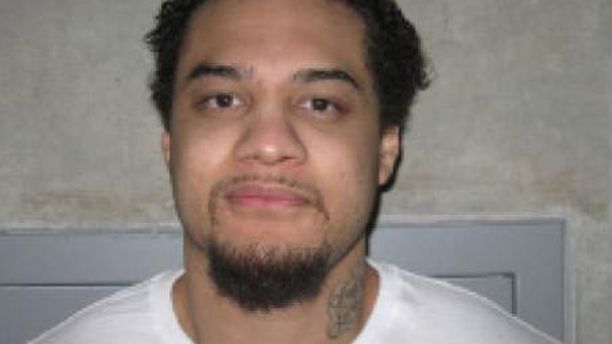 U.S. District Judge John Dowdell dismissed the Angilau’s family’s wrongful-death suit Friday, citing the video as proof that the U.S. marshal acted reasonably. The family argued Angilau was armed only with a pen and the four shots fired were excessive.

The video was released after a media coalition including The Associated Press argued it was a public record in an important police use-of-force case.

The U.S. marshal was cleared of any wrongdoing shortly after the shooting.

The Department of Justice wanted the video kept under seal over concerns it could lead to retaliatory gang violence. Faces of the judge, attorneys and jurors are blurred out. The agency didn’t immediately respond to a phone call and email requesting comment.

The Angilau family attorney, Bob Skyes, didn’t immediately respond to a phone call and email requesting comment Monday. He has previously said after seeing the video that the marshal “panicked” when other methods could have been used to subdue Angilau.

Angilau was one of 17 people named in a 2010 indictment accusing Tongan Crip members of assault, conspiracy, robbery and weapons offenses. He was the last defendant in the case to stand trial, with previous defendants being sentenced to 10 to 30 years in prison.

A mistrial was declared after the shooting.

The media coalition including the AP fought for several years with government attorneys to have the video released publicly, arguing that the shooting raised questions about police use of force and upholding the principle of open courts.