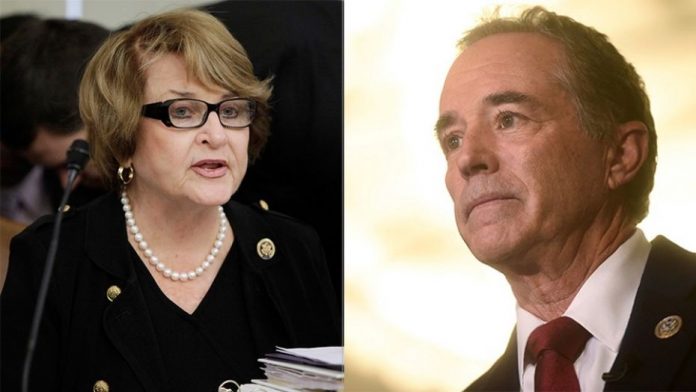 Where the House Ethics Committee stands on the alleged transgressions of Rep. Chris Collins, R-N.Y., is “pursuant to Committee Rule 7(g).”

The House Ethics Committee uses parentheses like the Cubs and Nationals use relief pitchers.

Perry Mason may be better suited to untangle the legal bromides spouted by the Ethics Committee. But Collins himself is pretty clear about his plight.

“Nothing of substance is there at all,” the New York Republican said about allegations he broke House policies and may have violated federal law.

But the House’s quasi-official Office of Congressional Ethics (OCE) — which, to make matters more confusing, is different from the actual Ethics Committee — doesn’t think so. The OCE charges Collins used his position in Congress to inappropriately help Innate Immunotherapeutics.

Collins sits on the board of the firm. The congressman also holds between $25 and $50 million in Innate stock. That makes Collins the company’s largest shareholder.

So is the House Ethics Committee actually investigating Collins?

Amid all of the “pursuants” and triplicate parentheticals, the Ethics Committee says it’s still evaluating things. Yet there is no official probe.

The House Ethics Committee wasn’t actually called the “Ethics Committee” until a few years ago. Back then, it was the “Committee on Standards of Official Conduct.” Regardless of the name today, the Ethics Committee is the bona fide panel which sits in judgment of House members. In 2008, the House developed the independent watchdog known as the “Office of Congressional Ethics.” The House permits the OCE to entertain accusations of ethical breaches from practically anyone off the street. The OCE can then refer potential cases to the actual Ethics Committee and render findings. The Ethics Committee itself can consider or dismiss cases flagged by the OCE. The best signal denoting an official “ethics investigation” comes when the Ethics Committee launches an “investigative subcommittee” to probe an issue. It’s up to the full House to mete out major forms of punishment like reprimand, censure or even expulsion.

The House Ethics Committee didn’t commission an “investigative subcommittee” in the case of Collins. It just said it would conduct “further review.” By the way, that additional look-see “does not itself indicate that any violation has occurred.”

So, Collins finds himself in congressional limbo. He’s not officially under investigation. Yet Collins isn’t in the clear, either.

“I am disappointed in the Ethics Committee,” fumed Collins after the announcement Thursday. “Sometimes they leave these [investigations] open for years.”

An ethics review into the conduct of former Rep. Charlie Rangel, D-N.Y., started in 2008 – culminating in censure for the New York Democrat in late 2010. The House Ethics Committee also began an investigation into Rep. Maxine Waters, D-Calif., in 2010. But it took until 2012 to clear Waters. The committee had to first navigate the Rangel issue. Then, when studying Waters’ conduct, the Ethics Committee had to dump two staffers who leaked information about the case to House Republicans.

No member likes any prodding by the Ethics Committee. But what lawmakers really hate is an inquest by the OCE.

Collins is no exception.

“They are a waste of taxpayer money and they accomplish nothing,” said Collins of the OCE. “I was exonerated on the original charges. They found two small nothings.”

“A lot of folks ignore them,” said Collins of the OCE. “The OCE was what we tried to get rid of.”

What Collins refers to is an effort by House Republicans to ditch the OCE in January. The night before the launch of the 115th Congress, House GOPers voted to defang the outside watchdog. But within hours, Republicans faced a political maelstrom. The backlash forced the Republican brass to frantically intervene and deep-six the proposal to neuter the OCE.

“They have no authority,” ranted Collins about the OCE. “They instructed my attorney to break attorney-client privilege. That’s how bad these guys are.”

But after the January fiasco, the OCE isn’t going anywhere.

Collins may harbor contempt for the OCE. But that’s nothing compared to the enmity he reserves for Rep. Louise Slaughter, D-N.Y. Slaughter authored the STOCK Act which bars lawmakers from using their position for financial gain on the markets. Slaughter lodged the original complaint about Collins with the OCE.

“She’s a despicable human being,” seethed Collins when asked about Slaughter. “You don’t go after another member with fabricated allegations like she did.”

It’s rare for lawmakers to speak on background or off the record with such vehement hostility about a colleague. But rancor like this on the record is practically unheard of.

In a statement to Fox News, Slaughter called Collins’s actions “a disgrace,” adding that the congresswoman “doesn’t need to defend herself.”

Congressional ethics cases are frequently convoluted and challenging to explain. The most complex part may be deciphering Byzantine House ethics rules and parsing parenthetical profusions in committee news releases. Collins’ fate hangs in the balance. Little is clear about what’s next. The only things that aren’t in question are what Collins thinks about the Office of Congressional Ethics, the Ethics Committee and Louise Slaughter.