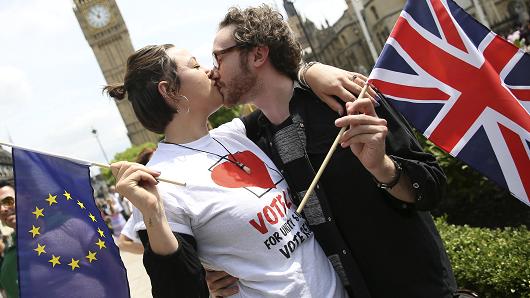 It comes against a backdrop of often fractious Brexit negotiations between London and Brussels this year, talks that are yet to provide businesses with clarity about Britain’s future relationship with Europe.

Bosses at British companies have also been watching new U.S. President Donald Trump, whose decisions have repercussions for businesses around the world.

“At the beginning of 2017 there were a lot of questions about what was going to happen to the M&A market, given the global uncertainty caused by Brexit and the new U.S. president,” said Nick Cline, a London-based M&A partner at law firm Latham & Watkins, who said the uncertain environment had acted as a driver for some deals rather than stifling activity.

“There are a lot of corporates out there in the U.K. and Europe who are seeing the changing landscape and as a result are even more focused on what they’re going to do to be tomorrow’s leaders.”

The jump in domestic deal-making contrasted with falls in both inbound and outbound U.K. M&A volumes, the data show, with the former slipping 12.9 percent to $115.1 billion and the latter down 9.4 percent to $112.5 billion.

That meant overall M&A volumes with any U.K. involvement dipped 0.7 percent to $375 billion, a softer decline than the 1.4 percent slide in global deal volumes to $3.5 trillion, according to the data.