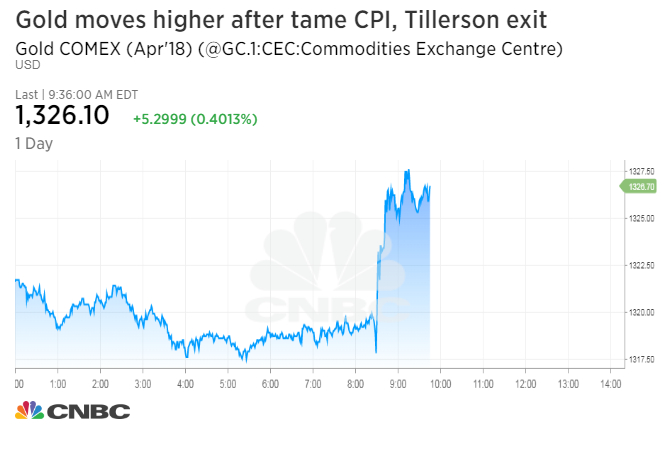 Gold was bid higher after Secretary of State Rex Tillerson became the latest high profile casualty of the Trump administration.

Tillerson, former ExxonMobil CEO, was respected in the markets and was seen as a steady hand, but was previously reported as being ready to exit his role. President Donald Trump immediately replaced him with CIA Director Mike Pompeo. Deputy CIA Director Gina Haspel was named Director, CIA.

Gold futures for April were trading at $1,327, up about a half percent.

Grady said gold was bid higher after the 8:30 a.m. ET release of CPI showed tame inflation, exactly in line with economists’ consensus estimate of a 0.2 percent gain. The low reading on inflation is not likely to spur faster Fed rate hikes, and that also brought in buyers.

The Tillerson exit was also a plus for gold. “The news gives you support but I wouldn’t say, ‘I need to be long gold. Gold is going to explode because Tillerson is out,'” said Grady. “It’s more uncertainty for the market. More uncertainty in general. I think a lot of these things keep a bid in gold.”

Grady said Tillerson’s exit was viewed as a negative, but the fact that Trump has said he would talk to North Korea was seen as a positive development.