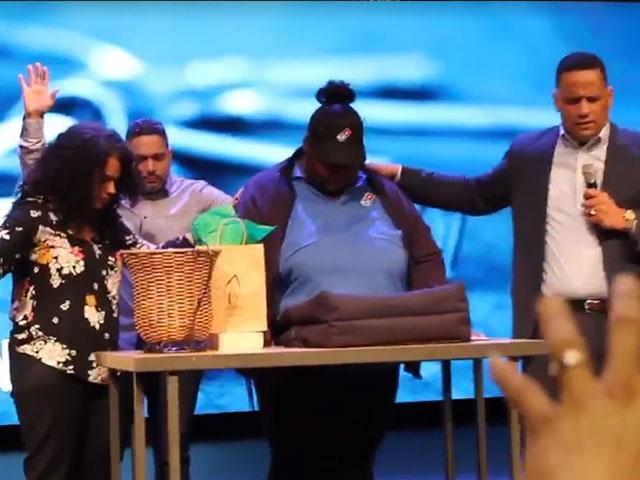 New Life Covenant Church in Chicago, Illinois is one of the fastest growing churches in the city and known for going above and beyond in reaching out to the community.

The pastor ordered a pizza during service and when the pizza delivery woman arrived, he brought her on stage and gave her a tip she’ll likely never forget.

The post reads, “For the month of February, we have been challenging our church to honor people. So Pastor Wilfredo De Jesús ordered a pizza with intentions of surprising the delivery person. She walked on stage and was clueless of what was going on.”

In the video, the pastor asks the woman how much she usually receives for a tip during each delivery and then tells her, “I’ve been teaching our church about honoring people, just ordinary people who work hard, so we wanted to do that for you.”

“I haven’t known you for long,” De Jesús says to her. “But I know God knows you, and He loves you.”

In an emotional series of events, he tells her to hold out her hand and proceeds to lay $100 in cash on her palm. Then invites anyone in the congregation who wants to contribute to her “tip” up onto the stage.

It’s not long before her hand is overflowing with cash and the woman breaks down in tears.

The woman, Monique, later tells the church she’s a single mom to two kids and “just trying to do my best.”

“Thank you all so much,” she says through sobs.

The church also gifts her with a Bible, invites her back to be a part of the community, and then prays over her.

“This is how we honor people,” De Jesús addresses the church. “We don’t know her story, we don’t know what she’s going through, maybe this was a prayer answered.”

CBN News contacted the church but has yet to hear back.