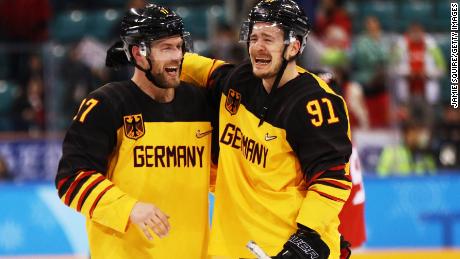 In a pulsating match at the Gangneung Hockey Centre, the 10th ranked Germans raced into a 3-0 lead and held on towards the end despite a spirited comeback from the much fancied Canadians.

Brooks Macek, Matthias Plachta, Frank Mauer and Patrick Hager all scored for the Germans who are now guaranteed at least a silver medal.

The “Eagle Carriers” will face the Olympic Athletes from Russia on Sunday’s final while Canada will play the Czech Republic for bronze on Saturday.

No German team has medaled in hockey since the 1976 Games in Innsbruck when West Germany claimed bronze.

And the 2018 team’s achievements have captured the imagination of fans back home.

Tennis legend Boris Becker tweeted his excitement over the victory. “We are totally fascinated by the ice hockey team,” he wrote in German, “Who would have thought that before the tournament?”
Canada has won men’s hockey gold in the last two Winter Olympics, Sochi 2014 and Vancouver 2010, but was shorn of its National Hockey League stars in Pyeongchang given the league’s decision to not oppose participation in the Games.

That loss meant a Canadian women’s team failed to win gold for the first time since the Nagano Games of 1998.