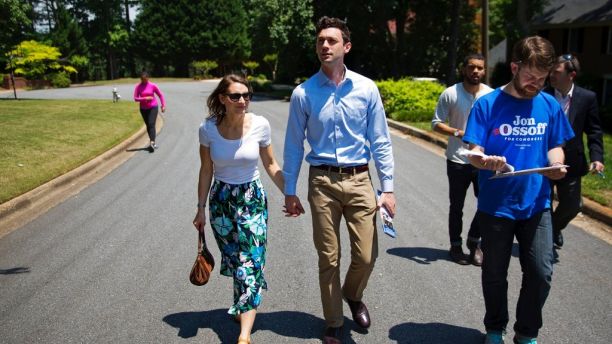 Democrat Jon Ossoff has made Georgia’s special House election a competitive and closely-watched race — despite the district remaining squarely in the hands of Republicans for nearly 40 years.

Ossoff faces Republican Karen Handel in the fight for the seat vacated by Tom Price, the recently appointed Health and Human Services secretary.

Early voting in Georgia’s 6th district began May 30, and June 16 is the final day to send in absentee ballots. June 20 is election day.

But given the sample size of the poll, Emory University political science professor Andra Gilespie told WXIA-TV the race was still “too close to call.”

WHAT YOU NEED TO KNOW ABOUT GEORGIA’S SPECIAL ELECTION

In what the Atlanta Journal-Constitution reported has been the most expensive House race in the U.S., Democrats have managed to outspend Republicans. Overall, the election cost more than $36 million with $21 million spent on advertising since April 18.

The seat has been held by Republicans since Newt Gingrich won it in 1978.

But Ossoff hopes to change that as he’s touted his national security expertise and experience leading a small business to woo voters. He also promises to push for criminal justice reform, protect civil liberties and defend Planned Parenthood, according to his campaign website.

Ossoff’s current living situation became a point of contention during the campaign as he doesn’t actually live in the congressional district he is vying to represent.

Federal law does not actually require a congressional candidate to live in his district. And Ossoff has explained that he lives just outside of Georgia’s 6th district in order to be with his fiancée, a medical student.

“As soon as she finishes her medical training, I’ll be 10 minutes back up the road into the district where I grew up,” Ossoff said.

The special election is largely seen as a test of President Donald Trump’s influence.

Ossoff’s campaign has drawn many big name celebrities to push the young Democrat toward victory in a volatile district.

Along with Milano, Christopher Gorham offered to drive voters to the polls during the runoff election on April 18.

Maddie Anderson, the south/central regional press secretary for the National Republican Congressional Committee, dismissed the celebrity endorsements and accused Ossoff’s campaign of “employ[ing] Hollywood elitists to be in charge of his voter outreach program.”

A former congressional aide and filmmaker, Ossoff was born and raised in Georgia, according to his campaign website.

Ossoff received his bachelor’s degree from Georgetown University where he studied under former U.S. Secretary of State Madeleine Albright and former Israeli Ambassador to the United States Michael Oren. He also earned a master’s degree from the London School of Economics. There, Ossoff wrote his master’s thesis on trade between the U.S. and China, his campaign website states.

Ossoff is the CEO of Insight TWI: The World Investigates which “produces world-class documentary films and television programmes, specializing in fresh, daring factual content and high-impact journalism,” according to its website.

Ossoff proposed to his longtime girlfriend, Alisha Kramer, earlier in May. Kramer is a third-year medical student at Emory University and is expected to apply to OB-GYN residency programs, according to the Atlanta Journal-Constitution.

Should Ossoff, 30, manage to “flip the Sixth,” he would be the House’s youngest congressman. Rep. Elise Stefanik, R-N.Y., is the youngest member currently at 32-years-old.