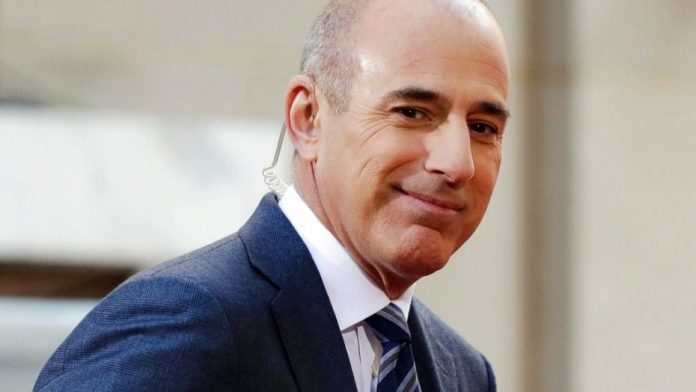 THE LEAD STORY: NBC News executives failed to act on complaints from several women about crude behavior by Matt Lauer, according to a news report detailing sexual misconduct allegations against the now-former “Today” show anchor … NBC News Chairman Andrew Lack announced Wednesday that Lauer had been fired for “inappropriate sexual behavior with a colleague.” NBC later said the misconduct started when Lauer and a female network employee were at the Sochi Olympics in 2014 and continued beyond that assignment. Lack said it was the first complaint lodged against Lauer in his 20 years at NBC, but “we were also presented with reason to believe this may not have been an isolated incident.” A report in Variety published Wednesday afternoon detailed multiple sordid allegations against Lauer, including that he gave one female colleague a sex toy, exposed himself to a different female colleague, often engaged in crude, sexually charged office banter and conducted multiple rendezvous with women as he traveled the world covering the Olympics for NBC. A former NBC News employee told the New York Times that he sexually assaulted her in his locked office in 2001.

TAX-CUT BILL CLEARS HURDLE; TRUMP APPLIES PRESSURE: The Republican plan to overhaul the nation’s tax system cleared a key procedural hurdle in the Senate on Wednesday, as President Trump rallied support for the bill …  The bill advanced on a 52-48 party line vote, allowing senators to start debate on the sweeping legislation. Ahead of the floor vote, President Trump traveled to Missouri to rally support for the bill — and pressure Congress. “Now comes the moment of truth,” the president said during a rally in St. Louis. “In the coming days, the American people will learn which politicians are part of the swamp and which politicians want to drain the swamp.” The bill still faces hurdles in the Senate, where Republicans have just two votes to spare in their 52-48 edge over Democrats. The Senate’s tax overhaul plan is different from that of the House’s version. The two chambers would need to come together on a unified piece of legislation to advance to President Trump’s desk.

FOX NEWS EXCLUSIVE WITH CONYERS ACCUSER: One of the women accusing Democratic Rep. John Conyers of sexual harassment told Fox News that in addition to touching her inappropriately, he also failed to protect her when one of his top staffers assaulted her … In an interview on “The Story with Martha MacCallum,” Deanna Maher, a former deputy chief of staff for Conyers, described the incident with the high-level staffer as “pretty devastating.” She said it happened in 2001 when she was 61. The unnamed staffer grabbed her, forced her against a wall and “stuck his tongue down my throat at my age.” Afterward, Maher claimed Conyers gave her no help whatsoever. “I got no protection afterwards because Congressman Conyers covered that whole thing up.”

FOX NEWS EXCLUSIVE – MCCONNELL SEES ETHICS PROBE FOR MOORE: Senate Majority Leader Mitch McConnell says an ethics investigation of Roy Moore is “almost certain” if the Republican candidate is elected in the Dec. 12 Alabama U.S. Senate election … McConnell, who backed incumbent Sen. Luther Strange against Moore in September’s Republican primary runoff, told “The Ingraham Angle” that the Senate would “deal with the aftermath of the decision the people of Alabama make on Dec. 12.” He declined to indicate whether the Senate would vote to expel Moore, saying only “it’ll be up to the [Senate Ethics] committee.” Moore, 70, has been accused of sexually assaulting a 14-year-old girl and a 16-year-old girl in two separate incidents that occurred when he was in his early 30s. McConnell has said Moore should “step aside” in the Senate race.

NO JUSTICE FOR BENGHAZI VICTIMS’ FAMILIES: “I think real justice in this would be a bullet in the back of the head, frankly … I think their country has let them down.” – Jason Chaffetz, on “The Story with Martha MacCallum,” slamming verdict against Benghazi conspirator Ahmed Abu Khatallah, who was found guilty on several counts but not the major count of murder. Chaffetz believes the U.S. government did not do everything it could to get a sense of justice for the families of the Americans killed in the 2012 Benghazi attacks. WATCH

BAH HUMBUG, CNN: “These media types… are doing a disservice to a gracious act that the president and first lady have offered.” – Sean Spicer, former Trump White House press secretary, on “Hannity,” sounding off on CNN’s decision to boycott the annual White House Christmas party for the press. WATCH

Knocking Trump off Twitter was a ‘mistake,’ ex-employee says.

Over 15,000 scheduled American Airlines flights do not have pilots during busy holiday season.

Newt Gingrich: President Trump is decisively reining in the left.

Cal Thomas: The return of virtue.

Judge Andrew Napolitano: Thanksgiving is over but Mueller and his team remain hard at work.

Garrison Keillor apologizes after firing, reveals he put his hand up woman’s shirt.

The Brian Kilmeade Show, 9 am to Noon ET: “MediaBuzz” host Howard Kurtz will have the latest on the Matt Lauer sexual harassment scandal. Chris Wallace and James Rosen will take on Jared Kushner’s questioning by Robert Mueller’s investigators, North Korea, tax reform and other political hot topics of the day.

1993: President Bill Clinton signs the Brady Bill, which required a five-day waiting period for handgun purchases and background checks of prospective buyers. It is named for James Brady, who was shot during the assassination attempt against Ronald Reagan in 1981.

Thank you for joining us on Fox News First! Enjoy your day and we’ll see you in your inbox first thing Friday morning.