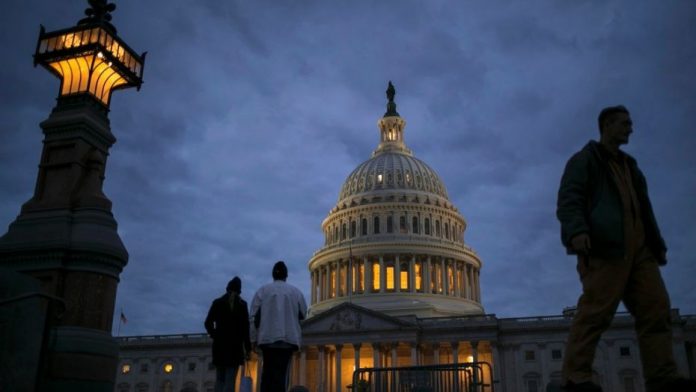 THE LEAD STORY – SHUTDOWN SHOWDOWN: Lawmakers are working to reopen the government, which shut down temporarily overnight after the Senate failed to meet the midnight deadline to approve a budget deal. But in a 71-28 vote early Friday, the Senate approved a bipartisan two-year budget deal, sending the plan to the House for approval …  The stalemate began when Sen. Rand Paul, R-Ky., repeatedly objected to a quick vote on the deal struck by Senate Majority Leader Mitch McConnell, R-Ky., and Senate Minority Leader Chuck Schumer, D-N.Y. Paul, vehemently opposed to “Obama-era deficits,” objected to the increases in government spending by $300 billion under the bipartisan deal and wanted a recorded vote on reversing the bill’s spending increases. Paul’s objections pushed the Senate votes on the budget deal past midnight into early Friday, sparking the temporary government shutdown.

However, the situation was potentially dicey in the House, where some liberal Democrats and tea party conservatives both oppose the budget deal. If the measure passes, the government would open Friday morning on schedule, said John Czwartacki, spokesman for the Office of Management and Budget, the agency responsible for coordinating any shutdown.

FOX NEWS EXCLUSIVE: TOP DEM OFFERED CONTACT WITH TRUMP DOSSIER AUTHOR: Sen. Mark Warner, the top Democrat on the Senate Intelligence Committee who has been leading a congressional investigation into President Trump’s alleged ties to Russia, had extensive contact last year with a lobbyist for a Russian oligarch who was offering Warner access to former British spy and dossier author Christopher Steele, according to text messages obtained exclusively by Fox News … “We have so much to discuss u need to be careful but we can help our country,” Warner texted the lobbyist, Adam Waldman, on March 22, 2017. “I’m in,” Waldman, whose firm has ties to Hillary Clinton, texted back to Warner.

LET THE WINTER GAMES BEGIN: Expect to see athletes from around the world participate in the opening ceremony for the 2018 Winter Olympics … The spectacle will start on Friday at 8 p.m. local time (6 a.m. ET) at the Pyeongchang Olympic Stadium in Pyeongchang, South Korea. A staple of the Opening Ceremony is the athletes’ parade, which features delegations from competing countries. This year, the delegations from North Korea and South Korea are expected to march together under a unification flag.

DIRECT CHANNEL TO IRAN?: The Trump administration secretly reached out to Iran in December to propose creating a direct channel to negotiate the release of prisoners held by each side, the Wall Street Journal reports … However, Iran didn’t respond and has refused to engage with U.S. officials on the offer, despite subsequent offers. The reported U.S. offer represented the first time since President Trump took office that the administration had signaled its willingness to engage in a potential prisoner swap.

#METOO BACKLASH: A California Democrat who was featured in Time magazine’s “Person of the Year” issue for her role in the anti-sexual harassment #MeToo movement has been accused of drunkenly groping a male legislative staffer at a softball game in 2014 … Assemblywoman Cristina Garcia allegedly stroked the then-25-year-old staffer’s back, tried to squeeze his buttocks and attempted to grab his crotch as he walked away from her. The staffer, Daniel Fierro, worked for Assemblyman Ian Calderon at the time. He did not immediately report the incident. But in January, he told Calderon, who then reported it to Assembly leaders. Garcia was “clearly inebriated” during the 30- to 35-second episode, Fierro said.

BUSH BADGE OF HONOR: “The president should wear the tired Bush critiques as a badge of honor. Trump is doing what previous administrations were unwilling or unable to do.” – Laura Ingraham, on “The Ingraham Angle,” slamming former President George W. Bush’s criticism of President Donald Trump’s immigration policies during an appearance in Abu Dhabi. WATCH

‘A ROTTEN DEAL’: “Actually, we’re going to bring back Obama-era deficits. I was elected to combat Obama-era deficits.” –  Sen. Rand Paul, on “Your World with Neil Cavuto” explaining why he held up the Senate’s vote on a massive budget deal. WATCH

Omarosa on ‘Celebrity Big Brother’: Trump tweets haunted me, had to ‘serve’ my country.

Prison for woman, 19, who livestreamed drunken-driving crash that killed sister.

Who are the richest U.S. Winter Olympians?

Dow has second-worst day ever. What’s going on? | What will Jamie Dimon do this time?

Canceling a father-daughter dance is an incredible example of political correctness gone out of control.

Why the sun will soon get dimmer.

Tucker Carlson Tonight, 8 p.m. ET: Kansas Secretary of State Kris Kobach on why he wants to bring the citizenship question back to the U.S. census.

The Fox News Rundown podcast: The 2018 Winter Olympics are underway in Pyeongchang, South Korea. Fox News foreign correspondent Simon Owen discusses ongoing tension between the U.S. and North Korea as the opening ceremonies begin. ISIS and Al-Qaeda have been pushed out of their respective territories, but their methods are evolving. Fox News’ Lucas Tomlinson and Bryan Llenas explain. Plus, commentary from Fox News Sunday host Chris Wallace.

The Brian Kilmeade Show, 9 a.m. ET: Chris Wallace and Chris Stirewalt take on the battle over the budget in Congress and the implications of the second government shutdown in two months. Geraldo and David Bossie take on the top political headlines of the day. eHarmony CEO Grant Langston talks Valentine’s Day.

1964: The Beatles make their first live American television appearance on “The Ed Sullivan Show,” broadcast from New York on CBS.

1950: In a speech in Wheeling, W.Va., Sen. Joseph McCarthy, R-Wis., charges the State Department is riddled with Communists.

Fox News First is compiled by Fox News’ Bryan Robinson. Thank you for joining us! Enjoy your day, and weekend! We’ll see you in your inbox first thing Monday morning.