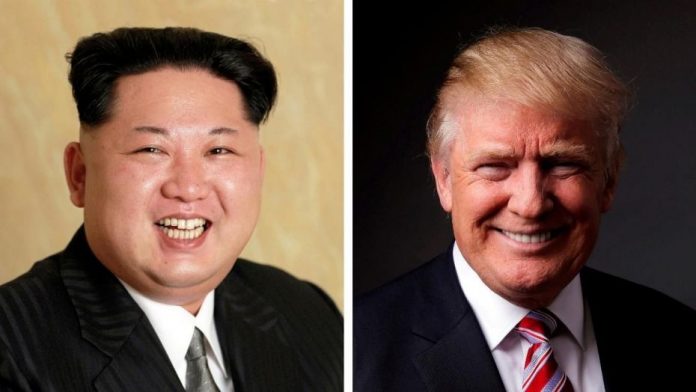 THE LEAD STORY – A CAUTIOUS APPROACH TO TRUMP-KIM MEETING: President Trump’s planned meeting with North Korean dictator Kim Jong Un was met with cheers from many Republican lawmakers — but some skepticism from others … After months of saber-rattling, Trump accepted an invitation by Kim to meet face-to-face. The two would meet by May, South Korean National Security Adviser Chung Eui-yong announced at the White House on Thursday. Trump stressed Kim was interested in denuclearization and that sanctions would remain in place until an agreement is reached. “Kim Jong Un talked about denuclearization with the South Korean Representatives, not just a freeze,” Trump tweeted. “Also, no missile testing by North Korea during this period of time.”

WHAT LED TO TRUMP ACCEPTING KIM’S INVITATION?: While traveling in Djibouti, U.S. Secretary of State Rex Tillerson told reporters a “dramatic” and surprising change of posture by Kim Jong Un led Trump to agree to a meeting … The U.S. was taken aback at how “forward-leaning” Kim was in his conversations with a visiting South Korean delegation, Tillerson said. Trump, He added, made the decision “himself” after determining the time was right for “talks” — but not formal negotiations.

Defense officials hailed the planned meeting as a “potential breakthrough.”Sen. Lindsey Graham, R-S.C., praised the planned meeting, saying that it “gives us the best hope” to “peacefully” resolve escalating tensions. But Graham warned Kim directly that “the worst possible thing you can do is meet with President Trump in person and try to play him.” Rep. Ed Royce, R-Calif., chairman of the House Foreign Affairs Committee, also said the invitation showed that sanctions on North Korea were “starting to work.”

However, some lawmakers and observers remained skeptical. Sen. Ed Markey, D-Mass., also said that the invitation was the “beginning of a long diplomatic process” and that Trump needed to avoid “unscripted” remarks that could derail it. Evan S. Medeiros, a former adviser in the Obama administration, warned that Kim could be “playing Trump,” adding, “Kim will never give up his nukes.”

FLORIDA 911 CALLS CAPTURE CHAOS, HORROR: The Broward County Sheriff’s Department released 10 of 81 emergency calls placed during the shooting at a Florida high school on Valentine’s Day that left 17 people dead … Included among the callers are several family members who students reached out to in the midst of the chaos, a person living nearby that thought they heard gunshots and an individual who spoke in such a low voice that the dispatcher had trouble hearing him when he said, “Marjory Stoneman Douglas High School is being shot up.” Several of the calls were transfers from other 911 operators, including one from a parent who said her son said he “heard noises and pops and he thinks there’s a shooting going on at the school.” Another woman who was emotional also called in saying she was talking with her son who “said ‘Shots! Shots! Shots! Mom! God.”

FOX NEWS EXCLUSIVE: FAMILY TIES AND KREMLIN BACK CHANNEL ‘LIES’: Blackwater private security founder Erik Prince tells Fox News that there was no perjury, no collusion and no attempt to set up a back channel to the Kremlin when he met with a Russian oligarch weeks before President Trump’s inauguration ... Prince, who also Education Secretary Betsy DeVos’s brother, says accusations that he lied to the House Intelligence Committee simply aren’t true. The Washington Post cites anonymous sources in its report that Special Counsel Robert Mueller “has gathered evidence that a secret meeting in Seychelles just before the inauguration of Donald Trump was an effort to establish a back channel between the incoming administration and the Kremlin.”

BRACING FOR TARIFF IMPACT: Observers will be watching Wall Street closely Friday following President Trump’s order imposing tariffs on steel and aluminum imports  … Trump’s order, which he signed Thursday, carved out an exception for Canada and Mexico for now while North American Free Trade Agreement (NAFTA) negotiations are under way. Stocks posted gains Thursday after Trump signed the tariffs order, easing concerns on Wall Street that the plan would fuel a trade war. The tariffs will go into effect in 15 days and critics of the plan are debating its potential impact on consumers.

NO JOY, ALL APOLOGIES AT ABC SHAREHOLDER’S MEETING: ABC News’ “The View” star Joy Behar has reportedly apologized for recent comments that mocked Vice President Pence’s Christian faith … Disney CEO Bob Iger said during the Q&A portion of a shareholder meeting on Thursday that Behar apologized directly to Pence on the phone. A source close to Pence confirmed to Fox News that Behar did apologize. The shareholder who asked the question was Justin Danhof, who is the general counsel for the National Center for Public Policy Research. Danhof told Iger that some of Disney’s recent decisions are “strange when trust in media is at an all-time low” and referred to Disney’s ESPN as a “24/7 anti-Trump tirade channel” before bringing up the Behar controversy.

DEMOCRATS’ FARRAKHAN PROBLEM: “It’s embarrassing that this nut is a power broker in the Democrat Party and the media won’t cover it.”–  Author and commentator Mark Steyn, on Tucker Carlson Tonight, blasting some Democrats’ relationship with Nation of Islam leader Louis Farrakhan and liberal leadership’s refusal to disavow him. WATCH

NO CALIFORNIA LOVE: “California is almost acting like it’s a separate country altogether, not a separate state.”  –  Laura Ingraham, sounded off on the sanctuary city debate and the “radical takeover of California,” in her monologue for “The Ingraham Angle.” WATCH

Will atheist Dem have a prayer in deep-red Tennessee’s special election?

Dreamers to Democrats: We’re tired of your lies.

Shock in Milwaukee over ‘cluster’ outbreak of HIV and syphilis, including babies and teens.

Household net worth jumps to $98.7 trillion.

Amb. Callista Gingrich: Ending human trafficking must be a global priority for us all.

Obamas in talks to create programs for Netflix

Susan Sarandon says Paul Newman once gave up some of his salary for equal pay.

Daylight saving time: When and why we spring clocks forward.

The Volkswagen Beetle will soon be squashed.

The deadliest animals in America probably aren’t what you think.

Hannity, 9 p.m. ET: What’s behind the media’s anti-Trump excess? And will they ever accept reality? Sean Spicer and the Hill’s Joe Concha weigh in.

The Fox News Rundown podcast: President Trump signed a proclamation on steel and aluminum tariffs, defying critics and causing concerns of a trade war. Fox News’ John Stossel weighs in on the move. Texas jump-started the midterm elections season with a strong turnout from both political parties. Tom Bevan, co-founder and publisher of RealClearPolitics, discusses the possibility of a blue wave as Pennsylvania’s special election Tuesday approaches. Plus, commentary by ‘The Five’ co-host Juan Williams.

1997: Gangsta rapper The Notorious B.I.G. (Christopher Wallace) is killed in a drive-by shooting in Los Angeles. The killing remains unsolved.

1964: The U.S. Supreme Court, in New York Times Co. v. Sullivan, raises the standard for public officials to prove they’d been libeled in their official capacity by news organizations.

Fox News First is compiled by Fox News’ Bryan Robinson. Thank you for joining us! Enjoy your day and weekend! We’ll see you in your inbox first thing Monday morning.