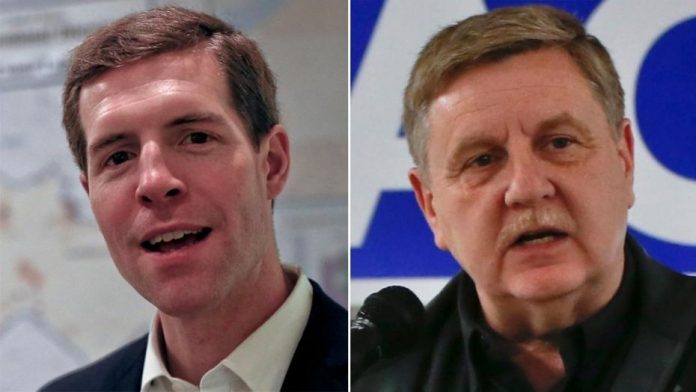 THE LEAD STORY – PENNSYLVANIA COULD SET THE TONE FOR NOVEMBER: The first special election of 2018 features Republican Rick Saccone and Democrat Conor Lamb battling Tuesday for the congressional seat in Pennsylvania’s 18th district … The congressional seat opened after Republican Rep. Tim Murphy, who was staunchly anti-abortion, resigned in 2017 amid reports that he asked his mistress to get an abortion when he believed she was pregnant. Democrats are hoping to stir up enough enthusiasm in the special election – especially among union members – to increase voter turnout and change the party representing a district that has recently been red. In illustration of the importance of Tuesday’s special election, Saccone has received major support from Vice President Trump, Ivanka Trump and Donald Trump Jr. President Trump himself traveled to western Pennsylvania this past weekend to campaign for Saccone and urge voters to elect him to advance the White House agenda. Joe Biden campaigned for Lamb.

TRUMP IN HOSTILE TERRITORY: When President Trump visits San Diego to examine prototypes of the border wall, he will be landing in the largest city on the U.S.-Mexico border to formally oppose his plans … Numerous rallies are planned by groups both for-and-against Trump and his push to build a “big, beautiful wall” separating the two countries. Trump will make his first visit to the city Tuesday since being elected. Protests are also being planned across the border in Tijuana, Mexico. Organizers on both sides were urging people to remain peaceful after recent scuffles at rallies in Southern California, including brawls at a Dec. 9 rally near where the prototypes stand. California has become a focal point for clashes between state officials and federal authorities over the Trump administration’s immigration policies. The tension reached a fever pitch last month when Oakland Mayor Libby Schaaf tipped off illegal immigrant residents on imminent ICE raids, enabling several to escape.

AFTER 14 MONTHS, ‘NO EVIDENCE OF COLLUSION’: President Trump trumpeted the draft report from the GOP-led House Intelligence Committee that it found “no evidence of collusion, coordination or conspiracy between the Trump campaign and the Russians” in an all-caps Twitter post Monday night … “We didn’t find any evidence of collusion and I don’t think [special counsel Robert Mueller] will either,” Texas Republican Rep. Mike Conaway, who led the bipartisan investigation, said on “Special Report.” The top Democrat on the committee, California Rep. Adam Schiff, responded to Trump with tweet saying that the panel’s Republicans “lack the courage to stand up to a President of their own party when the national interest necessitates it.” The committee’s investigation was based on four topics: Russian active measures against the 2016 U.S. election, the U.S. government’s response to the attack, links between Russians and the Trump and Clinton campaigns, and purported leaks of classified information.

FEAR OF SERIAL LONE STAR BOMBER: Texas police and residents are on high alert and Gov. Greg Abbot has offered a $15K reward for arrests after a series of deadly package bomb attacks reminiscent of the “Unabomber” have stunned the city of Austin … A teenager was killed and at least two women were seriously hurt after a pair of explosions rocked homes in Austin on Monday — just two weeks after a separate blast which authorities said is believed to be linked to both incidents. The first explosion occurred on March 2, killing 39-year-old Anthony Stephan House after a “device” exploded on the front porch of his Austin home. The blast was initially investigated as a suspicious death, but is now being viewed as a homicide. Monday’s attack occurred just 12 miles from House’s home. Though investigators believe the package bombs are linked, they said it’s too early to “assign a motive.”

TRUMP SHAKES UP THE SYSTEM: “How many of those guys won Ohio?” –  Laura Ingraham, on “The Ingraham Angle,” taking on Republicans who have been critical of Trump on his trade and tariff plan. WATCH

EXPANDING THE DOSSIER PROBE: “We want to know how many people actually saw this, how many people had access to it, how much reliance was put on it, when was it shown to President Obama.” –  Rep. Peter King, on “America’s Newsroom,” explaining that the widening of the probe into the anti-Trump dossier is aimed at finding out when top Obama administration officials – including the former president – became aware of the information. WATCH

Rumors of possible Supreme Court vacancy could fire up Republican base, experts say.

College student kicked out of class for telling professor there are only two genders.

Grandson gets permission to retrieve body of Charles Manson.

‘Right to try’ unapproved drugs advances personal freedom — but risks must be taken into account.

Trump is reorganizing the public land Leviathan – and DC bureaucrats are not happy.

Fox & Friends, 6 a.m. ET: Rep. Devin Nunes on House Intelligence Committee’s conclusion that there was no collusion between the Trump campaign and Russia; Republican congressional candidate Rick Saccone on his push to win the special election in Pennsylvania’s 18th district. Donald Trump Jr. sounds off on the special election in Pennsylvania and more. Is a serial bomber at large in Austin, Texas? We’ll have the latest on the investigation.

The Fox News Rundown podcast: Tuesday is Election Day in Pennsylvania’s 18th Congressional district. Fox News Politics Editor, Chris Stirewalt, discusses the possibility of a Democratic win and what that might mean for the GOP. Are violent video games to blame for real world violence? That was one of the questions posed by President Trump to a panel of industry executives and experts last week.  We take a closer look. Plus, commentary by Harry Kazianis, director of defense studies at the Center for the National Interest.

1964: Bar manager Catherine “Kitty” Genovese is stabbed to death near her Queens, New York, home; the case gains notoriety over the supposed reluctance of Genovese’s neighbors to respond to her cries for help.

1925: The Tennessee General Assembly approves a bill prohibiting the teaching of the theory of evolution.

1781: The seventh planet of the solar system, Uranus, is discovered by Sir William Herschel.

Fox News First is compiled by Fox News’ Bryan Robinson. Thank you for joining us! Enjoy your day! We’ll see you in your inbox first thing Wednesday morning.