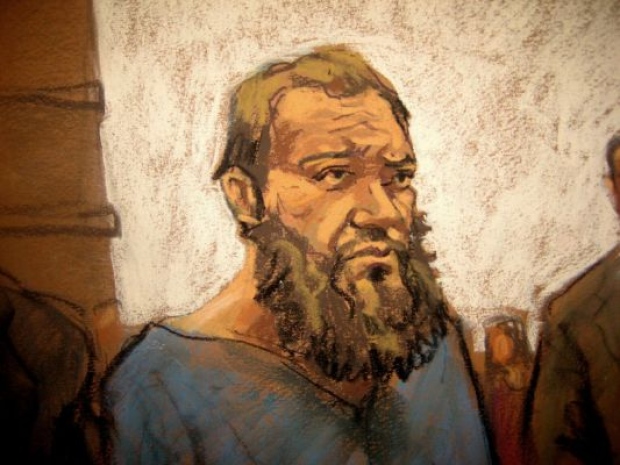 A former University of Manitoba student whose fingerprints were recovered from a massive unexploded bomb outside a U.S. military base in Afghanistan was sentenced Tuesday to 45 years in prison.

Muhanad Al Farekh was sentenced in a Brooklyn, N.Y., court for supporting the militant group al-Qaeda and helping to prepare a 2009 truck bomb attack on the base. It was less than the life sentence sought by prosecutors.

The 32-year-old had been found guilty by a jury in September of the charges of conspiring to murder Americans, using a weapon of mass destruction and supporting a foreign terrorist organization. Al Farekh will appeal both the verdict and sentence, said Sean Maher, one of his lawyers.

Before U.S. District Judge Brian Cogan imposed the sentence, Al Farekh’s other lawyer, David Ruhnke, read a letter written by his client, who did not speak himself.

In the letter, Al Farekh did not directly address the crimes of which he was found guilty, but asked the judge to consider that young men could be misled into violence. Al Farekh said he is now opposed to violence.

Muhanad Al Farekh is an American citizen but lived in Winnipeg, where he has family, while enrolled at the University of Manitoba. (Jane Rosenberg/Reuters)

Assistant U.S. attorney Richard Tucker urged the judge not to believe the letter, saying Al Farekh remained “unshakably committed to violent jihad” and was “willing to say anything.”

Cogan said the letter was “not an enthusiastic acceptance of responsibility.”

“I just can’t draw anything from that,” he said.

Still, the judge said he was giving Al Farekh some hope of life after prison because he did not believe him to be “totally devoid of humanity,” citing the support of his family.

Cogan said that, with 15 per cent off his sentence for good behaviour and three years already served, Al Farekh could get out when he is 67.

Al Farekh is an American citizen but had lived in Winnipeg, where he has family, while enrolled at the University of Manitoba. In 2007, he and two friends boarded a plane in Winnipeg and left for Pakistan, court was told during the trial.

An explosion in Afghanistan two years later eventually led to the charges against Al Farekh.

On Jan. 19, 2009, a truck carrying a bomb exploded outside the U.S. Forward Operating Base Chapman in Afghanistan’s Khost province. About 90 Americans were working there, helping with construction of buildings such as schools and hospitals.

One U.S. soldier and numerous Afghan nationals were injured.

A second truck carrying a much bigger bomb — 3,400 kilograms of explosives — never detonated.

If it had, it would have been “catastrophic” and many people would have died, the jury was told.

The plan was for the first vehicle to detonate at the gate so the second truck, following closely behind, could enter the base and detonate inside “to maximize casualties and damage,” the prosecution said.

But the second truck got stuck in the blast crater from the first explosion. The driver of the second truck abandoned his vehicle without detonating its bomb and he was soon shot and killed by security personnel guarding the perimeter of the base, court heard. 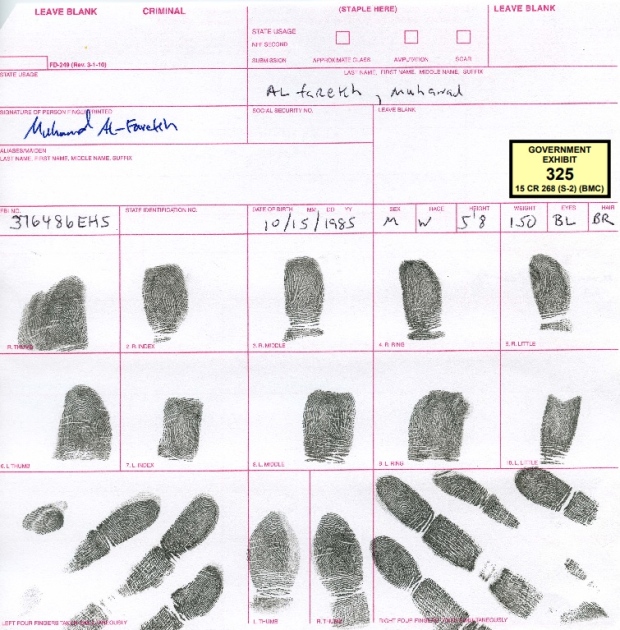 The jury heard evidence that 18 fingerprints matching Al Farekh were recovered from the unexploded bomb used in the attack on a U.S. base in Afghanistan. (U.S. Federal Court Exhibit)

Government witnesses testified there were 18 prints found on the unexploded bomb that matched Al Farekh’s fingerprints. The prints were pulled from the packing tape wrapped around the explosives.

Al Farekh was arrested in Pakistan in 2014 and transferred to the custody of U.S. authorities, who took him to New York in 2015 to face trial.

The jury convicted him of all nine charges he faced, which also included use of explosives and conspiracy to bomb a government facility.

“This guy’s for real and he’s a bad guy. He’s an honest to goodness al-Qaeda bad guy,” Tucker said of Al Farekh.

The defence had argued Al Farekh, who was born in Texas and raised in Dubai, was “an innocent man falsely accused” of crimes he didn’t commit.

Referring to some of the evidence as “junk science,” the defence tried to cast doubt on the validity of the handwriting analysis of what prosecutors said were letters written by Al Farekh in 2013.

“The government is coming in here and trying to portray fingerprint analysis and handwritten analysis as actual science,” said Maher. “That is ludicrous.”

Al Farekh and his two friends from the University of Manitoba — Ferid Imam and Maiwand Yar — travelled from Winnipeg to Pakistan on March 8, 2007. The jury heard Al Farekh had gone to a travel agency on Pembina Highway in Winnipeg to buy their airline tickets.

In the months before their departure, the three men watched video recordings encouraging violent jihad, listened to jihadist lectures and talked about their support for violent Islamist extremism, court was told.

In one instance, the jury was shown a video recorded at a Winnipeg apartment  in February 2007, just a few days before the trio left for Pakistan.

In that home video, Al Farekh is seen at his computer, searching online for a video posted by an al-Qaeda affiliate. It was a 38-minute video titled “Lee’s Life for Lies,” released online in January 2007 by the Islamic Army in Iraq, a Sunni insurgent group fighting against the U.S. military and the Iraqi government, court heard.

“The reason that that video is important is because it tells you something about the defendant’s state of mind just a couple weeks before he gets on that airplane,” said prosecutor Richard Tucker.

“The evidence has shown that Muhanad Al Farekh watched videos that glorified the killing of American soldiers,” prosecutor Douglas Pravda told the jury.

Evan Kohlman, co-founder of a company that scours the Internet looking for terrorist propaganda and then advises private sector clients as well as government agencies, testified the video shows graphic footage of the aftermath of attacks on U.S. soldiers, including “roadside bombings, sniper attacks, other very graphic footage, close-up footage, of attacks on U.S. personnel inside of Iraq.”

Once they embarked on their journey, Yar and Imam never returned to Canada.

Like Al Farekh, they joined al-Qaeda, with Imam becoming a weapons trainer at a camp where he taught others how to use machine guns, pistols and rocket-propelled grenades, the prosecution said. His whereabouts are unknown.

Yar’s brother testified the family later was told by an unidentified person in Pakistan that Yar had been killed in that country.

In its sentencing submission, the prosecution argued “the defendant was born into privilege and had every opportunity to lead a productive and law-abiding life. Instead, he chose to embrace hatred and violence.

“He tried to kill U.S. soldiers and aid workers, and joined al-Qaeda, where his U.S. citizenship allowed for his rapid advancement into the organization’s elite external operations group.

“He has made no effort to accept responsibility for his actions, and given his background, training and expertise, remains a dangerous individual.”