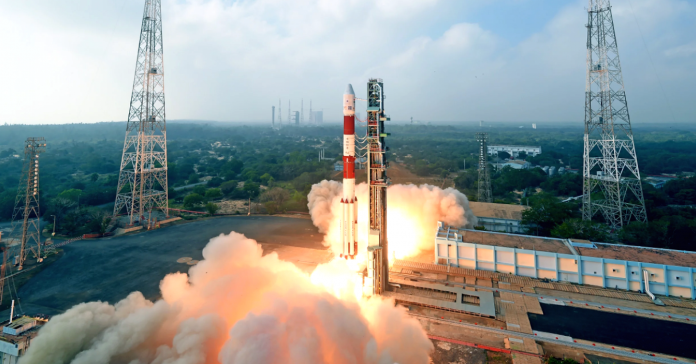 Satellite manufacturer Swarm Technologies is under scrutiny by the Federal Communications Commission (FCC) for the unauthorized launch of four prototype satellites in January, the regulatory authority confirmed to CNBC on Friday. The news was previously reported by IEEE Spectrum.

Swarm — founded in 2016 by former Google and Apple engineers Sara Spangelo and Benjamin Longmier, respectively — launched its first four SpaceBee satellites aboard an Indian-built PSLV rocket in January. This was a snub to the FCC, which had dismissed the company’s application a month before.

The FCC confirmed to CNBC that it revoked Swarm’s authorization to launch its next four satellites, contracted to go to orbit aboard a Rocket Lab mission in April.

“We’re aware of the situation and can confirm that we set aside their grant while we’re looking into the matter,” an FCC spokesman told CNBC in a statement.

“We’re currently in the process of finalising the manifest for this flight, as it was always possible the launch could have been a third test flight. Rocket Lab will not launch spacecraft that do not have the relevant regulatory approvals or licenses,” said Rocket Lab CEO Peter Beck in a statement.

Swarm, Spangelo and Longmier did not respond to requests for comment.

Anthony Serafini, chief of the FCC’s Experimental Licensing Branch, notified Swarm of the authority’s investigation in an email to Spangelo, the company’s CEO. The FCC told Spangelo it is setting aside the previously-granted April license “in order to permit assessment of the impact” of the unauthorized January launch.

According to the IEEE Spectrum report, Serafini raised concern to the company that the miniaturized technology would be difficult to track in orbit because the satellites are so small — about the size of a home internet router. Swarm tried to make the satellites easier to track, both trying GPS locators and experimental radar reflectors, according to the report. But Serafini raised concerns about both methods, and the FCC therefore dismissed Swarm’s application.

Spaceflight Industries, which sold payload space for 19 satellites onboard PSLV-40, facilitated Swarm’s inclusion on the rocket, a person familiar with the situation told CNBC. While Spaceflight acted as a broker between Swarm and the rocket provider — Indian Space Research Organisation’s commercial division, Antrix — Spaceflight was not the intermediary between Swarm and the FCC. Spaceflight received an email from Swarm three days before the launch, CNBC learned, which told the broker that Swarm’s FCC license was pending and approval was imminent.

While an unusual situation, Spaceflight did not know of the concerns the FCC raised with Swarm, which allowed Antrix and Spaceflight to move forward with the launch. According to the person familiar, there is a “softness” in international regulatory rules between launch providers, satellite payloads and the FCC. That gray area allows for launches to move forward, with the stipulation that any satellites placed in orbit do not begin transmitting before the license is approved. Regulations are stiffer in the U.S., the person clarified, but legally the launch was clear to move forward.

IEEE Spectrum also reported Spangelo’s work at Google included developing “a spacecraft concept” for the X Company division of Google-parent Alphabet which works on experimental long-term projects, many of which never see the light of day.

A person familiar with the situation disputed this, and told CNBC that Spangelo did not work on such a project. But she did work for two X Company programs before leaving to found Swarm: the Wing team — a drone delivery project — and the Rapid Evaluation team, this person said.

The FCC’s denial of Swarm’s application due to space debris concerns raises further questions. Officially, no federal agency has this regulatory authority, a person familiar with similar disputes told CNBC. The FCC assumed the responsibility to govern launches in this way, but the most recent meeting of the National Space Council may mean that regulatory authority is now in the hands of the Department of Commerce instead. Commerce Secretary Wilbur Ross announced he intends to make the department a “one stop shop” for regulatory approval in the commercial space industry.

The Department of Commerce, as well as private launch company Rocket Lab, did not immediately respond to CNBC’s request for comment.