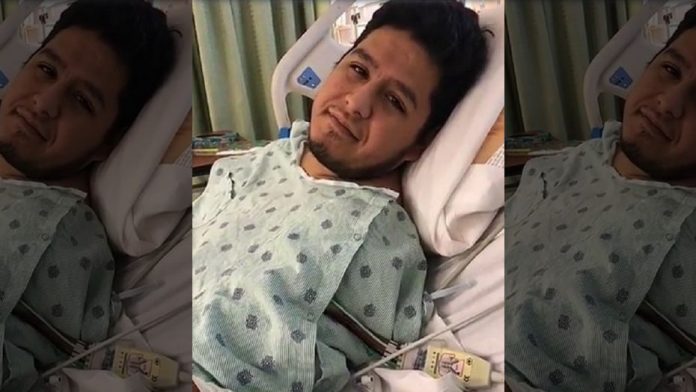 A daycare teacher in Houston had to have his right foot amputated recently, after it became infected with a flesh-eating bacteria.

Raul Reyes, 26, sought treatment at a clinic for what he thought was a blister on the foot after an injury at work, but instead was diagnosed with the flesh-eating bacteria, the Houston Chronicle reported.

Doctors had no choice but to remove the foot to save Reyes’ life, his wife Joseline Reyes said.

“The blister was covering his entire foot,” she said.

Losing a foot was a terrible outcome for her husband, but things could have been much worse, she added.

Doctors believe Reyes contracted the infection through an open wound from an ingrown toenail, but they are unsure where he first caught the infection.

Salt or brackish water are common places for infection, the station reported.

In October, a Texas woman died of flesh-eating bacteria after a raw oysters banquet, Fox News reported. She and friend ate about two dozen raw oysters each before the woman became ill.

The woman was “crabbing” with her friends and family on the Louisiana coast when she contracted the infection, the report said.

Most infections happen between May and October and common symptoms include diarrhea, nausea, fever and chills, while more severe infections can lead to death, Fox News reported.

However, Joseline Reyes told Fox 19 that the couple had not gone to the beach in a year.

“He’s perfectly healthy,” she said. “So, it’s just weird how all of this happened.”

She told the Chronicle that the couple’s attitude toward recovery remains positive.

“He is very eager to start therapy for a prosthetic,” she said.

The family has set up a GoFundMe account to raise money for his prosthetic foot because Raul does not have insurance, the station reported.

Joseline told Fox 19 Houston that Raul’s 3-year-old students are also helping him get through his ordeal.

“Sometimes I send him videos of the kids saying ‘hi’ to him and it just raises his spirits, and he wants to go back to work already and be with the kids,” she said.