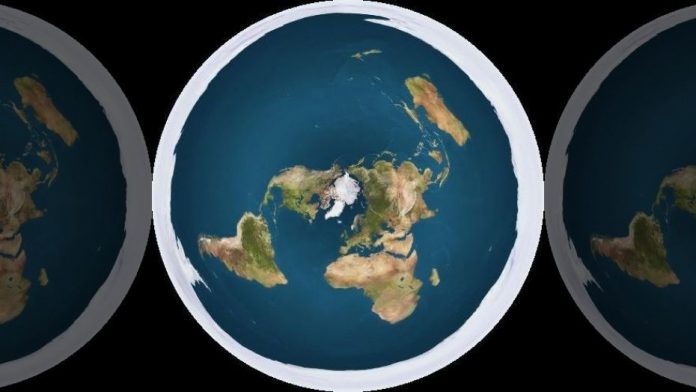 In this depiction of what a flat Earth would look like, Antarctica is represented as a layer of ice surrounding a disc-shaped Earth.

Blame it on bureaucracy: A California man who planned to launch himself 1,800 feet skyward in a home-built rocket to prove that Earth is flat has had to reschedule.

Mike Hughes said the Bureau of Land Management wouldn’t approve his plan to use public land for Saturday’s planned experiment, so he’ll have to move the project to private land next week, the Washington Post reported.

The 61-year-old limo driver said he had received verval approval from the same federal agency just last year, pending an OK from the federal Aviation Commission, the paper reported.

Hughes added that engine trouble in his motor home, which was converted into a ramp, also affected his original launch plans.

“It’s still happening. We’re just moving it three miles down the road,” Hughes told the Post on Friday. “This is what happens any time you have to deal with any kind of government agency.”

Hughes said the rocket will take flight next week, from private property near the Mojave Desert, along Route 66.

“I don’t see [the launch] happening until about Tuesday, honestly,” he told the paper. “It takes three days to set up. … You know, it’s not easy because it’s not supposed to be easy.”

If all goes according to plan, Hughes said his stunt will be the first phase of the flat-Earth space program, sponsored by Research Flat Earth, a group that believes Earth is flat.

Hughes claims to have built his steam-powered rocket out of scrap metal parts in his garage, with the entire projecting costing around $20,000. The rocket should travel about a mile at a speed of roughly 500 mph, he said.

The daredevil’s goal is to get miles above Earth and snap a photo, to prove that astronauts conspired to fabricate the shape of the planet.