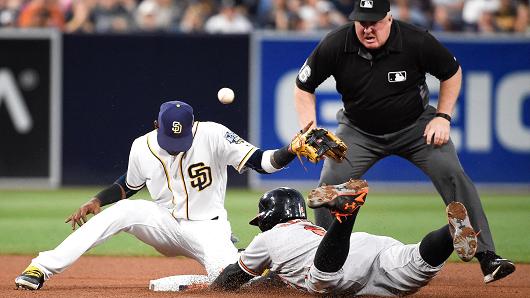 Jonathan Schoop, #6 of the Baltimore Orioles, slides into second base with a double as Alexei Ramirez, #10 of the San Diego Padres, misses the throw while umpire Bill Miller looks on during the fourth inning of a baseball game at Petco Park on June 28, 2016, in San Diego, California.

“Community and conversation are central to both baseball and Facebook, and MLB Network’s innovative broadcasts will bring these interactive and social elements of the game to life to fans around the world in new ways on our platform,” Dan Reed, Facebook head of global sports partnerships, said in a statement.

The games are mostly on Wednesday afternoons, so they are far from prime time but stand as another foray into live sports for the social media company.

Facebook will start the baseball season with an April 4 matchup of the Philadelphia Phillies and the New York Mets.