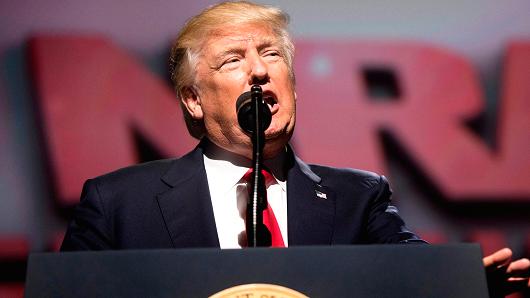 A Facebook executive who ran the company’s advertising business during the 2016 U.S. election said Tuesday that President Trump paid more than Hillary Clinton to reach potential voters on the social media platform.

“After some discussion we’ve decided to share the CPM comparison on Trump campaign ads vs. Clinton campaign ads,” Andrew Bosworth said in a tweet, referring to cost-per-1000-impressions, a typical measure of the price of a digital ad campaign.

“This chart shows that during (the) general election period, Trump campaign paid slightly higher CPM prices on most days rather than lower as has been reported,” tweeted Bosworth, the former vice president of advertising who’s now in charge of consumer hardware at Facebook.

According to the chart below, which covered the period from June 21 to Nov. 8 of 2016, Trump’s CPM rate was higher than Clinton’s. During the last weeks of the campaign, the gap grew, with Trump’s rate climbing to between $35 and $40, while Clinton’s was around $20 to $25.

A recent report in Wired, based on a statement from Brad Parscale, director of Trump’s digital operations in 2016, suggested that Trump got a better deal on Facebook ads than did Clinton. This story argued that Facebook’s advertising software had in effect rewarded some of the more-sensationalist and divisive Trump ads, which drew more interactions from those who saw them, by showing them to even more users.

If true, that would have lowered the CPM for Trump’s ads. But that wasn’t the case, according to Bosworth’s tweets.

“Prices depend on factors like size of audience and campaign objective. These campaigns had different strategies. Given the recent discussion about pricing we’re putting this out to clear up any confusion,” Bosworth said on Twitter.

Trump today named Parscale as manager of his 2020 re-election campaign.