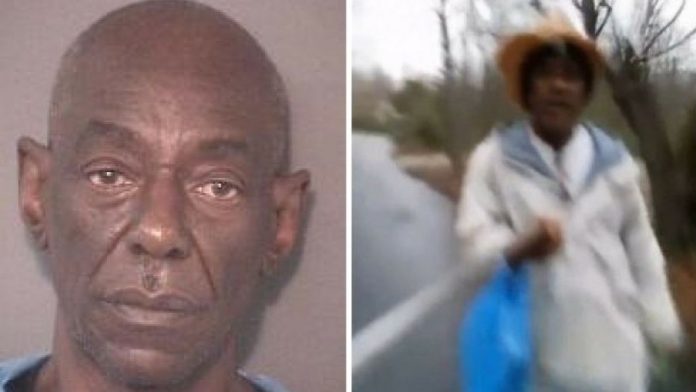 The man suspected of shooting and killing a North Carolina man near Wingate University Monday in an incident broadcast on Facebook Live has turned himself in, police said.

The suspect, Douglas Cleveland Colson, 65, turned himself to the Union County Sheriff’s Office Tuesday. He was being held without bond on a charge of first-degree murder.

On Monday, police found Prentis Robinson dead after being shot several times. Robinson was broadcasting himself live on Facebook as he was walking down a street before he was shot.

Minutes before the shooting, Robinson had gone to the Wingate Police Department and spoke with the chief about a cellphone that had been stolen from him, Wingate Police Chief Donnie Gay told WCCB-TV.

In a portion of the video, Robinson wore a hat and used a selfie stick to record himself talking and walking along a street in Wingate, about 30 miles southeast of Charlotte. At one point, Robinson was heard saying “You on live,” apparently telling another person the conversation was being recorded.

The video showed Robinson was approached by someone who fired four shots with a long gun.

The camera hit the ground after the shots rang out and showed sky and trees, and the gunman running away. A car pulled up and found Robinson.

Facebook took down the video because “the company could not have known if Robinson wanted this horrific act to be live streams on social media,” NBC News reported.

NORTH CAROLINA MAN SHOT TO DEATH WHILE LIVE ON FACEBOOK

Following the shooting, Wingate University and Wingate Elementary School were placed on lockdown for a few hours.

Gay told NBC News that Robinson lived in North Carolina for most of his life and posted videos on Facebook often of incidents that occurred in the neighborhood such as drug deals.

Chester Sanders, Robinson’s friend, said the videos may have made people angry.

“If people don’t like it and they get angry, at some point in time it will start and something will happen,” he said. “I don’t know if this was the reason for … this tragedy to happen but it happened.”

Robinson’s family told Fox 46 that they felt officers would become angry with Robinson over his videos.