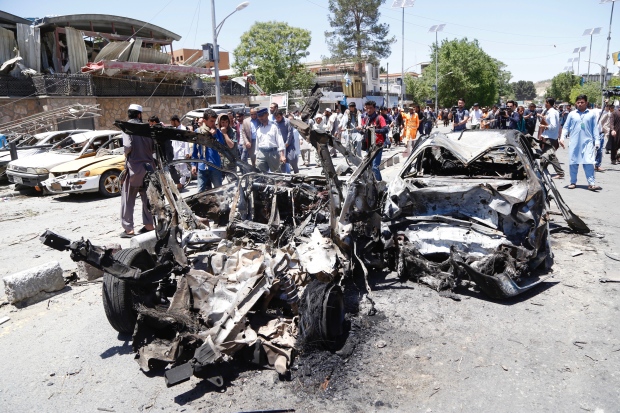 A massive suicide car bombing rocked a highly secure diplomatic area of Kabul on Wednesday morning, an attack that left a scene of mayhem and destruction and sent a huge plume of smoke over the Afghan capital.

The target of the explosion in the Wazir Akbar Khan area was not immediately known, but Ismail Kawasi, spokesman of the Public Health Ministry, said most of the casualties were civilians, including women and children.

The Afghan government’s media centre has raised the death toll later in the day to 90 killed. The centre also says that 400 people are now reported to have been wounded in the attack on Wednesday morning.

It was one of the worst attacks Kabul had seen since the drawdown of foreign forces from the country at the end of 2014. The bombing also raised serious questions about the Afghan government’s ability to secure the war-battered nation.

People survey the scene close to the source of the suicide blast on Wednesday in Kabul. (Hedayatullah Amid/EPA)

The explosion took place at the peak of Kabul’s rush hour when roads are packed with commuters. It went off close to a busy intersection in the Wazir Akbar Khan district, said Najib Danish, deputy spokesperson for the Interior Ministry.

Turkish Foreign Minister Mevlut Cavusoglu said Turkey would send some of its embassy staff out of Kabul after its building was damaged in the explosion that hit the Afghan capital. Cavusoglu added that no one among the Turkish Embassy personnel was hurt in the explosion. He said the ambassador was in Turkey at the time of the attack.

The International Federation of Journalists and its affiliate, the Afghan Independent Journalists Association, also condemned the brutal attack. At least two media staffers were killed and four others were wounded.

The neighbourhood is considered Kabul’s safest area, with foreign embassies protected by dozens of three-metre-high blast walls and government offices, guarded by police and national security forces. The German Embassy, the Foreign Ministry and the Presidential Palace are all in the area, as are the British and the Canadian embassies, and the Chinese, Turkish and Iranian embassies.

Staff at our embassy are safe and accounted for, and Canadians will keep working alongside Afghans as they rebuild and recover.

Prime Minister Justin Trudeau said Canada condemned the attack and expressed condolences to its victims. He said Canadian officials and staff in the city are accounted for and safe.

“The bomb went off just outside of the headquarters of a major cellphone company and a popular television station,” she said. “There is a hotel nearby. All of the windows were blown out.”

The Embassy of Canada suffered “significant” damage, according to Alex Lawrence, a spokesperson for Foreign Affairs Minister Chrystia Freeland. The specifics of the damage were not immediately clear. 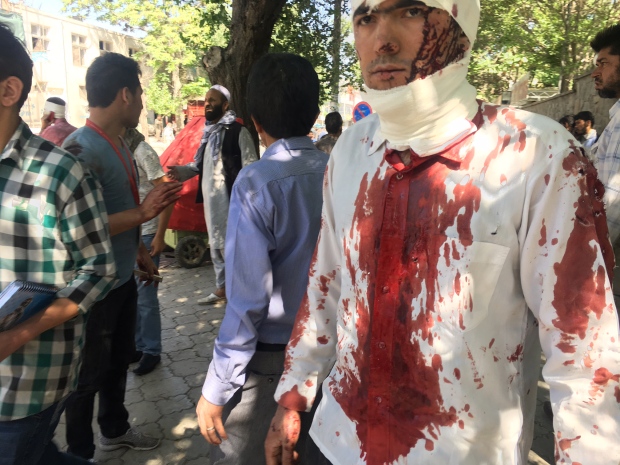 A man who was injured in a suicide bomb attack leaves the scene on Wednesday. (Jawad Jawali/EPA)

Local TV footage showed shocked residents soaked in blood stumbling about, then being ferried away to hospitals. Passersby stopped and helped the wounded into their private cars. Others congregated outside the nearby Italian-run Emergency Hospital.

The Taliban later issued a statement denying any involvement in the bombing and condemning all attacks against civilians. Zabihullah Mujahid, spokesman for the Taliban, said Wednesday’s explosion had “nothing to do with the Mujahedeen of Islamic Emirate,” as the Taliban call themselves.

Witness: ‘There were streams of blood’0:17

A statement from the Ministry of Interior Affairs says it “condemns in the strongest terms the terrorist attack” that killed so many.

Afghan President Ashraf Ghani strongly condemned the attack, which came just days into the Muslim holy month of Ramadan. A statement from his office quoted Ghani as saying that “the terrorists, even in the holy month of Ramadan, the month of goodness, blessing and prayer, are not stopping the killing of our innocent people.”

Pakistan said the “terrorist attack in Kabul this morning that has caused loss of precious human lives and injuries to many.” Pakistan’s Ministry of Foreign Affairs said “the blast has caused damage to the residences of some Pakistani diplomats and staff, living in the close vicinity, and inflicted minor injuries to some.”

China’s Foreign Ministry said its Kabul Embassy was partly damaged, but that all staff were “safe and sound” and there had been no reports of injured Chinese citizens.

Japan’s Foreign Ministry says two of its embassy employees, both Japanese nationals who were inside the embassy complex were slightly injured in the bombing. 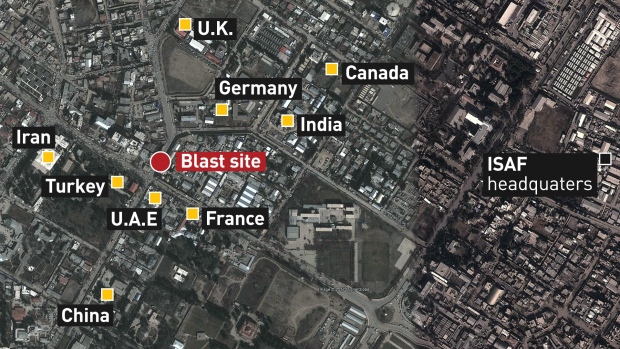 Kabul is located in northeastern Afghanistan. Yellow markings on the map indicate the locations of foreign embassies in the country’s capital. ISAF is the NATO-led International Security Assistance Force. (CBC)

Turkey’s Foreign Ministry said its buildings were damaged but no embassy employees were harmed. The ministry said Turkey would continue to stand by Afghanistan in the fight against terrorism.

India reported “some damage to windows” at the Indian Embassy building, located next to the German, Iranian and British embassies.

Germany has had troops in Afghanistan for 15 years, primarily concentrated in the north in and around Mazar-E-Sharif. They’re currently one of the biggest contributors to the NATO-led Resolute Support mission with around 980 soldiers on the ground to support and train Afghan security forces.

The U.S Embassy and the NATO mission in Kabul, located about a kilometre away from the site of the explosion, both condemned the attack. The alliance praised “the courage of Afghan Security Forces, especially the police and first responders” following the attack.

Wednesday’s explosion was so heavy that more than 50 vehicles were either destroyed or damaged at the site of the attack. Residents described a mushroom cloud over Kabul and windows were shattered in shops, restaurants and other buildings up to a kilometre from the blast site. 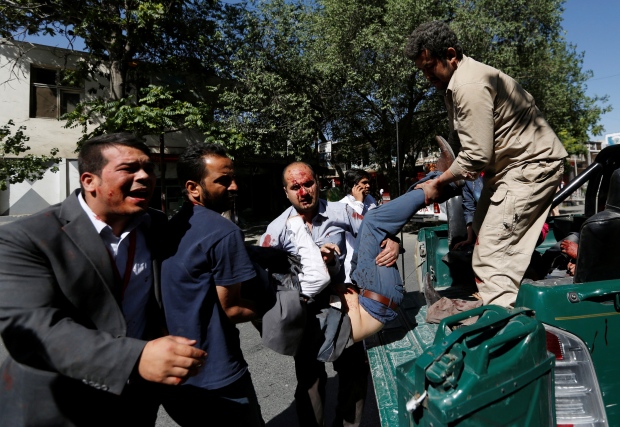