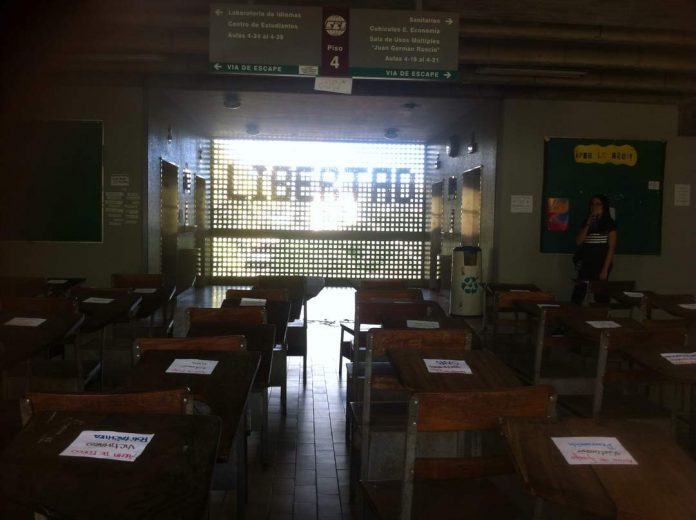 CARACAS, Venezuela – Universities in America are usually known as hotbeds of left-wing activism, but at the Universidad Central de Venezuela (UCD), where education is free and socialist policies have been in place for nearly 20 years, many students are now looking to the right for answers.

As is the case with most industries in Venezuela, universities are run and controlled by the government. However, despite being filled with government employees keeping a watchful eye on events, students are rapidly turning against the socialist dictatorship led by Nicolás Maduro.

Despite being a university of over 60,000 students, the campus remains largely empty. Liliana Cespedes, a teacher in the university’s English department, says that just 20 percent of students regularly attend her classes, and many don’t even turn up to exams or complete their courses.

“The situation is too serious right now for students to dedicate sufficient time to studying,” she said. “Many prioritize attending anti-government marches or trying to earn money to support their families. During some of my classes, just five or six students turn up.”

In one of the universities main communal areas, students have arranged a series of chairs, as well as a wall display commemorating the deaths of every protester killed by police in anti-government protests. Some of the victims are as young as 14 years old. 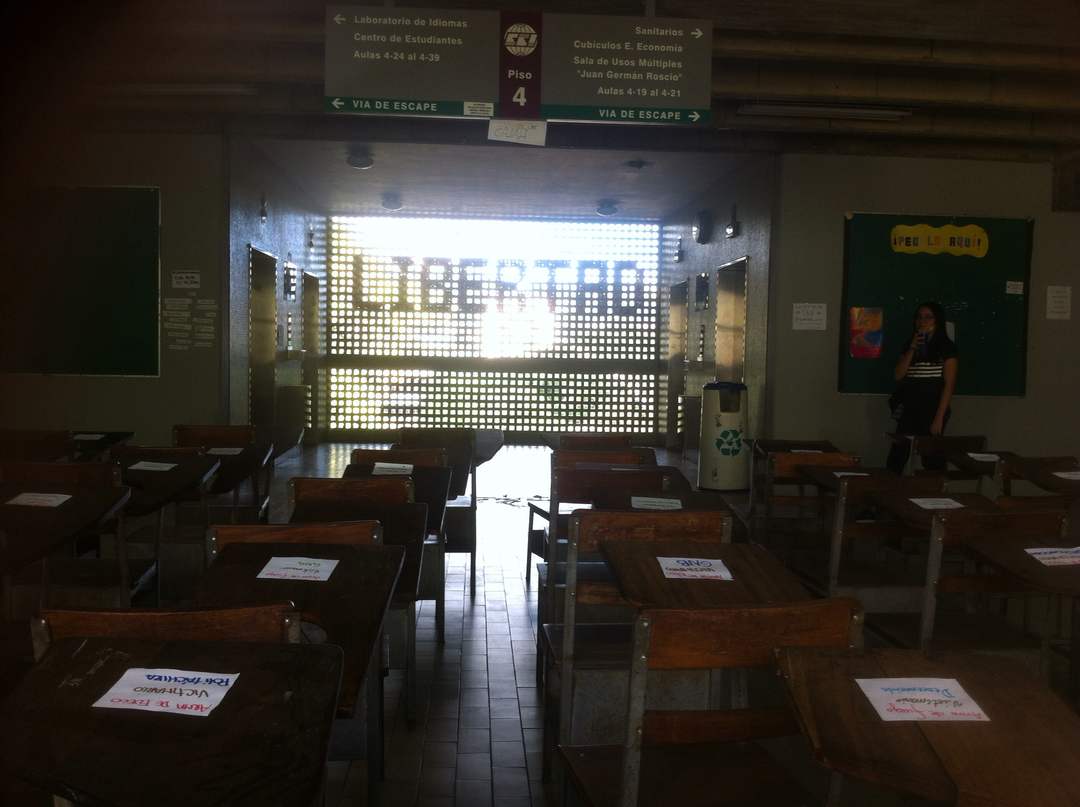 Students have placed a desk for every individual killed in the violence. A mural at the end of the room reads ‘FREEDOM’

Amid the chaos, three female students – Antonella Di Ciano, Gabriela Bello, and Mariana Mezzoni – have organised their lives around studying and protesting the government. Coming from middle-class backgrounds, they have all considered moving abroad, but instead have chosen to stay in Venezuela and fight for their liberties, even if it means rationing basic resources. 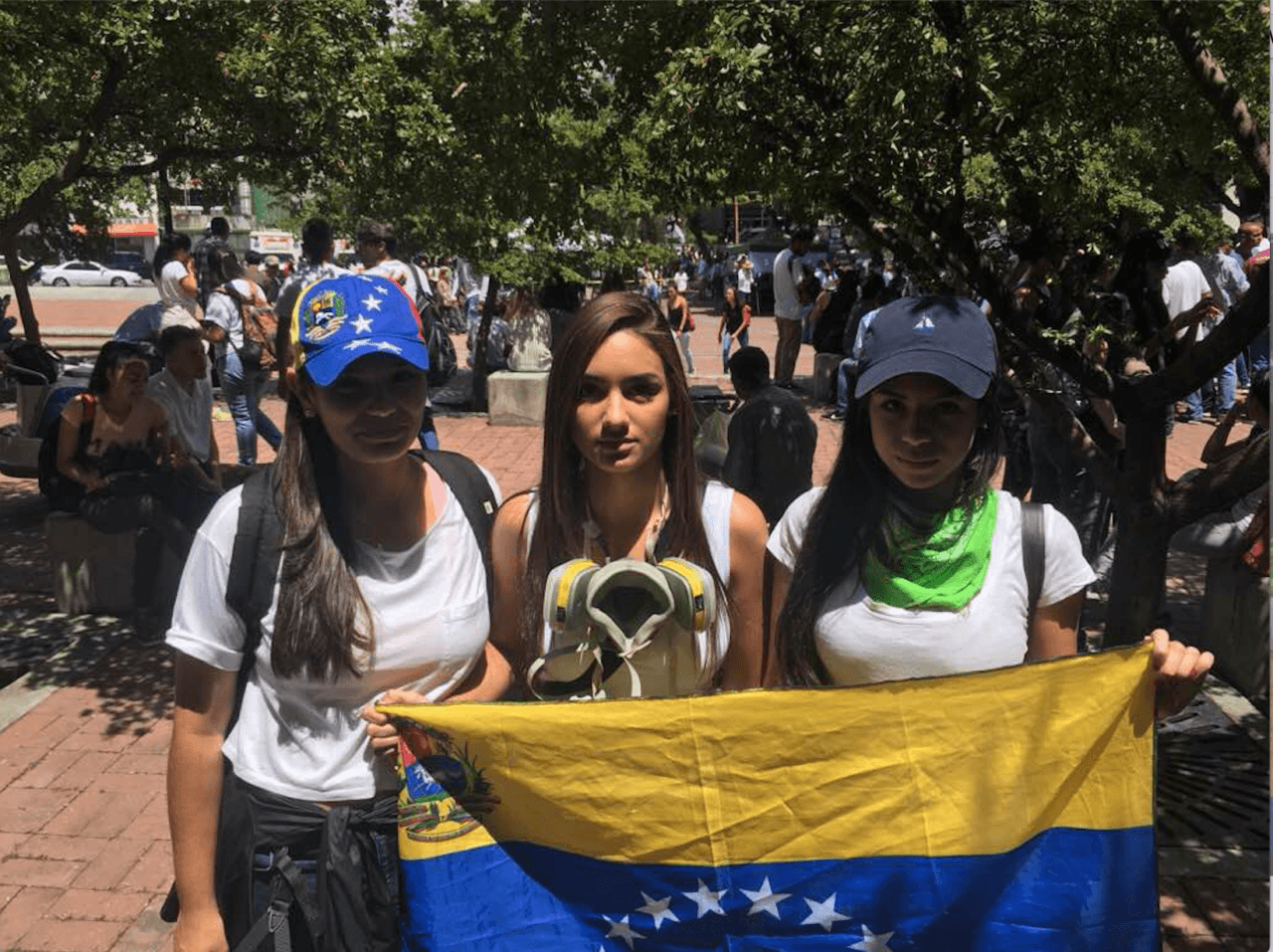 “We attend every protest the opposition calls upon,” says Di Ciano. “This is history, we are going to tell our children and grandchildren about how we fought for freedom under this dictatorship. It is our duty as students, as Venezuelans, as future mothers, as members of our family.”

“We don’t want to leave our country to those people that only want power and money, who brainwash the poor,” Mezzoni says. “Chavez’s socialist ideas actually worked because he made society more equal – by making everyone poor.”

However, some still remain sympathetic towards the regime. Emiliano Bond, another student, says that although the socialist government made some mistakes, most of Venezuela’s current problems come from the reliance of its economy on oil:

Everything started in 2012 when the oil prices began to fall. If the oil price rises tomorrow, the majority of Venezuela’s problems will go away. Of course, the Chávez government made mistakes, but we used to be in a good place. If you look at the Guinness World Records in 2009, Venezuela was voted the happiest country in the world.

Student movements against the Maduro government have been ongoing since 2007, when they set up the Movimiento Estudantil to campaign against Hugo Chávez’s proposed changes to the Venezuelan constitution, which were consequently rejected in a referendum.

However, the student movement has now grown considerably in size and in importance, holding regular demonstrations, sometimes for days at a time. Like regular demonstrations, many student protests have descended into violence, as students demand not just an end to government rule, but also better education programs. Many have died in the process. Since the crisis started, thousands of professors have left the country to look for opportunities elsewhere. 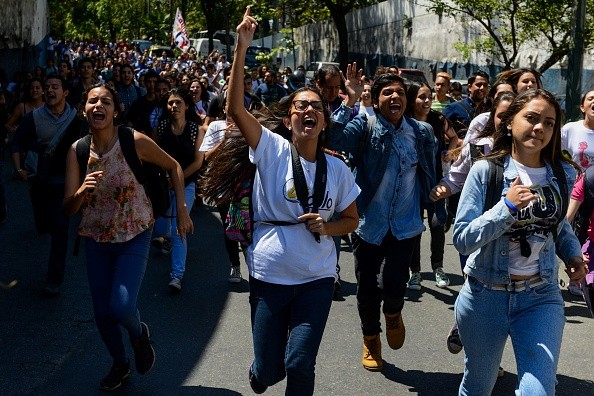 Just this week, student protesters clashed with the Venezuelan National Guard for protests as they called for fresh presidential elections and an end to Maduro’s plans to create an unelected constituent assembly.

Although many of the students may still identify as ‘left-wing,’ (two of the main opposition parties are self-proclaimed socialists), and simply fighters for democracy, the anti-socialist feeling in Venezuela amongst the younger generation is far stronger than that in the West. Students, as well as ordinary Venezuelans, are waking up to how a socialist regime has brought their country to the brink. Unfortunately, it might already be too late.