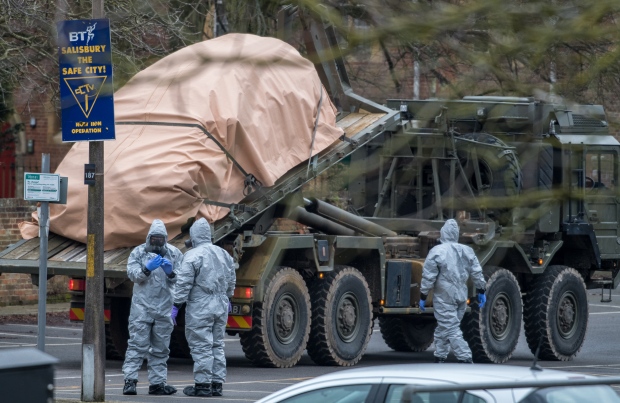 A senior British legislator says the poisoning of former Russian spy Sergei Skripal and his daughter is “looking awfully like it was state-sponsored attempted murder.”

Tom Tugendhat told the BBC it is still too early to be absolutely certain. The chairman of the Foreign Affairs committee said he would be “surprised” if Prime Minister Theresa May does not end up blaming Russian officials for the attack.

He says the announcement may come soon. May is chairing a National Security Council meeting on Monday to hear the latest evidence.

Military personnel wearing protective suits remove a police car and other vehicles on Saturday from a public car park as they investigate the poisoning of Sergei Skripal and his daughter on March 4. (Chris J Ratcliffe/Getty Images)

Skripal, 66, and his daughter Yulia, 33, remain in critical condition following the March 4 nerve agent attack. They were found unconscious on a bench in Salisbury. Skripal lived in the town, 140 kilometres southwest of London.

Officials have not said what nerve agent was used or who is to blame.

Skripal worked for Russian’s military intelligence service GRU before he was recruited to spy for Britain. In 2006, he was sentenced to 13 years in prison in Russia for espionage. He was freed in a 2010 spy swap and settled in England.

The health implications of the attack broadened Sunday after British officials said limited traces of contamination were found in a restaurant and a pub in Salisbury.

Public health officials said the risk of others being sickened by the chemicals that put Skripal and his daughter in hospital was very low. But they advised people who had patronized the businesses during a two-day period to wash their clothes, double-bag articles for dry cleaning, and wipe down items like jewelry.

“It’s really important to understand the general public should not be concerned. There is, on the evidence currently, a very low risk.” Dr. Jenny Harries of Public Health England said at a news conference.

Authorities haven’t revealed how or where the Skripals were exposed to the nerve agent.

In Russia, suspicions over the poisoning point to Britain. 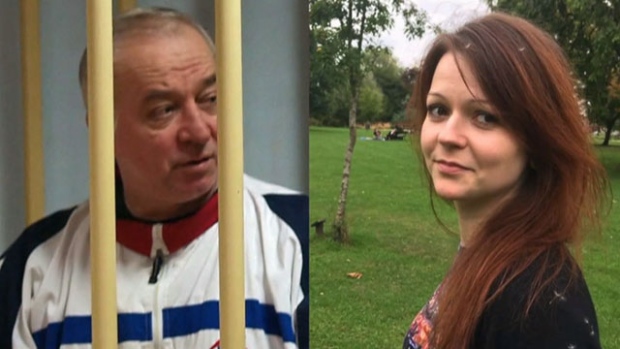 Skripal and his daughter Yulia, seen in a composite photo, were found slumped on a park bench last Sunday outside a shopping centre in the southern English town of Salisbury. (Misha Japaridze/AP; Yulia Skripal/Facebook via AP)

“If you think about it, well, the only ones for whom the poisoning of the ex-GRU colonel is advantageous are the British,” Dimtry Kiselev, one of Russia’s most powerful media figures, said during his Sunday news program.

The British motive? “Simply in order to feed their Russophobia,” Kiselev posited.

British Foreign Secretary Boris Johnson has warned that if Russia was behind the poisoning, then Britain would “respond appropriately and robustly.”

Johnson also drew parallels between the poisoning of Skripal and the murder of former KGB agent Alexander Litvinenko who died in London in 2006 after drinking green tea laced with
radioactive polonium-210.

A British public inquiry found the killing of Litvinenko had probably been approved by Russian President Vladimir Putin and carried out by two Russians, Dmitry Kovtun and Andrei Lugovoy.
Lugovoy is a former KGB bodyguard who later became a member of the Russian parliament.