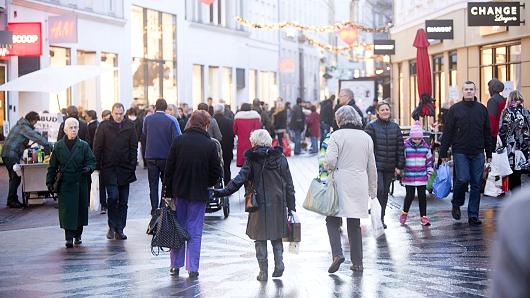 Shoppers walk past stores on Stroget in central Copenhagen, Denmark, on Monday, Nov. 19, 2012.

The European Union’s statistics office Eurostat estimated that consumer prices in the 19 countries sharing the euro rose 1.3 percent year-on-year in June, decelerating form 1.4 percent in May and 1.9 percent in April.

But economists polled by Reuters had expected a steeper deceleration to 1.2 percent.

They also expected inflation excluding unprocessed food and energy — the two most volatile components — at 1.0 percent, the same as in May.

But in fact core inflation accelerated to 1.2 percent in June, Eurostat data showed.

The European Central Bank wants to keep headline inflation below, but close to 2 percent over the medium term and has been buying billions of euros worth of government bonds on the secondary market to inject cash into the economy and spur faster rice growth.