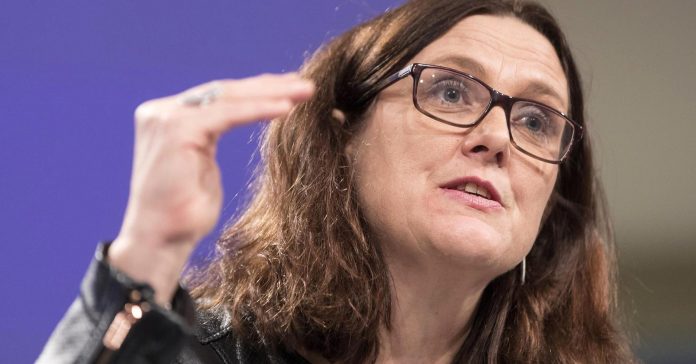 So far, the U.S. government has not even been able to give its trading partners, including Europe, a set of guidelines that would allow them to win exemption. And when Donald Trump tweeted on Monday that his Commerce Secretary Wilbur Ross would be meeting with EU representatives soon, Commission officials minutes later said they had no idea what he was talking about, or whom.

Malmstrom addressed a trade forum on Monday with a thinly-veiled reference to the current incumbent of the White House, insisting that Europe would “stand up to bullies” and would not be intimidated by threats. The EU says it is not prepared to open new trade negotiations in order to gain exemption for the tariffs, and one Brussels think-tank director told me that making any such concessions would mean giving in to blackmail.

Instead, the Commission has announced a three-pronged strategy that is primed for use and which seems to have been well-received by both business leaders and politicians across Europe. Dutch Finance Minister Wopke Hoekstra told me that Trump’s tariffs were a bad idea for citizens and workers on both sides of the Atlantic, while France’s Bruno Le Maire said that “protectionism was a dead end” and that EU members must respond firmly as a united bloc. Meanwhile, Germany’s new economy minister, Peter Altmeier, hoped the situation would soon deescalate, and was keen to emphasize that the European response remains solely on paper at this stage.