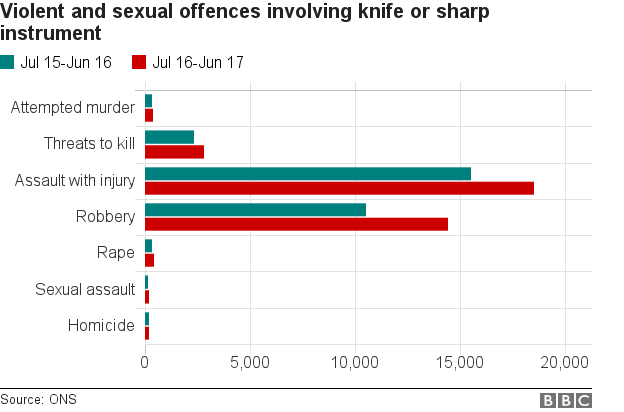 Police recorded crimes for England and Wales surged to over five million over the last year, according to a new Office for National Statistics (ONS) bulletin.

Britain’s official statistical institute reports a 13 per cent increase in crime in the year ending June 2017, with the total number of offences surpassing five million for the first time a decade.

Violent crime appears to have increased even more sharply, with some of the headline figures including:

Non-violent crime also appears to be on the increase, with burglary up 6 per cent, theft from the person up 11 per cent,  shoplifting up 11 per cent, and vehicle-related crime up 17 per cent.

Clear-up rates are also extremely poor for some offences, with just one burglary in ten resulting in “a suspect being identified”.

The previous year’s figures had also represented a huge increase on the year before.

Police constables argue that government cutbacks which have seen their numbers fall to their lowest levels since 1985 are the primary cause for forces’ increasing inability to stem the growing crime wave.

“Every day officers set out to protect their communities from harm but every day their job is being made more difficult with cuts in funding and cuts in numbers but zero cuts in demand,” a Police Federation spokesman declared in response to the ONS bulletin.

“Ultimately the public suffer, as the figures show, and their safety is compromised.”

“Everyday” hostility shouldn’t be tolerated, even something small. If you’ve experienced this, please report https://t.co/8qB5reMEId pic.twitter.com/jlX6it2eCA

However, while there is strong anecdotal evidence that reduced manpower has hollowed out community policing and left dangerous blind spots in areas where crime and radical Islam are rife, critics have suggested the police are prioritising the wrong things.

For example, Gloucestershire Police were urging the public to report “non-crime hate incidents” as recently October 16th — just days after forces were criticised by the public for arresting thousands of people for allegedly offensive online comments.

The number of people arrested under section 127 of the Communications Act 2003, which makes it illegal to intentionally “cause annoyance, inconvenience or needless anxiety to another”, had increased by as much as 877 per cent in some force areas — but the number of successful prosecutions has actually fallen, suggesting enforcement may be somewhat overzealous.

Police have also been ridiculed for a number of questionable public relations stunts, such as having male constables perform their duties with their fingernails painted blue in order to raise awareness of slavery, and the vinyl wrapping of police cars in LGBT colours for patrols.