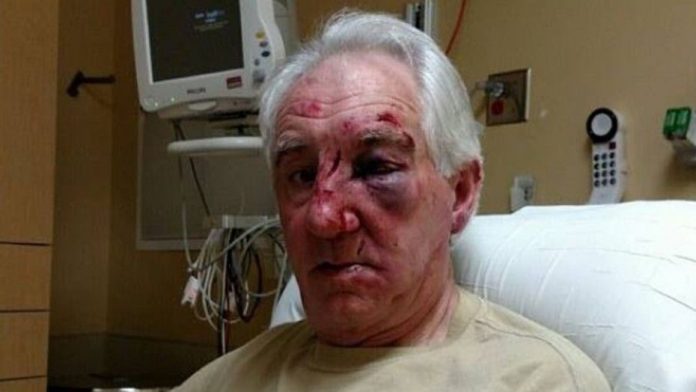 Minnesota investigators are looking for a dangerously violent man who fractured an elderly man’s face with his fists after a road rage incident.

“Anyone who would brutally attack a senior citizen in this manner is a clear danger to the public,” the Anoka County Sheriff’s Office said in a Facebook post Sunday that included a photo of the badly injured victim.

“Had enough?” the much younger attacker asked the victim after pummeling him for more than a minute, deputies said.

The victim, who was not identified, sustained multiple face fractures and several lacerations requiring many stitches in the Friday evening attack in East Bethel.

AmyJane Johnson, of St. Paul, Minn., identified herself on Facebook as the victim’s daughter-in-law and said he was 71.

She said the family was thankful he was alive.

“LOOK AT THIS PHOTO,” Johnson wrote. “This is a 71 year old man who did nothing…literally NOTHING to warrant this. Our family is heartbroken and helpless and those are the 2 worst feelings to have.”

She said her father-in-law didn’t know he’d been followed home and that he fortunately was able to get up and get into the house for help after he suffered through the attack.

She appealed for help in finding the “low-life” who did this to her father-in-law.

The incident began when the victim had to brake suddenly to avoid a traffic situation in front of him, Fox 9 Minneapolis reported. That angered the driver behind him who started driving aggressively and taunting him.

The victim thought the incident was over and drove home, investigators said. That was when the other driver set upon him, the station reported.

The suspect is described as a white man, approximately 35 years old, 6 feet or taller, short hair, possibly in a “buzzed” style. He was said to be wearing a longer length leather coat or jacket.

He likely has injuries to his hands, the station reported.

The suspect was driving a newer dark silver or gray vehicle with LED headlights and a line of LED lights just below the headlights, possibly a Mustang or similar vehicle.

According to Fox 9, the vehicle had dark tinted windows.