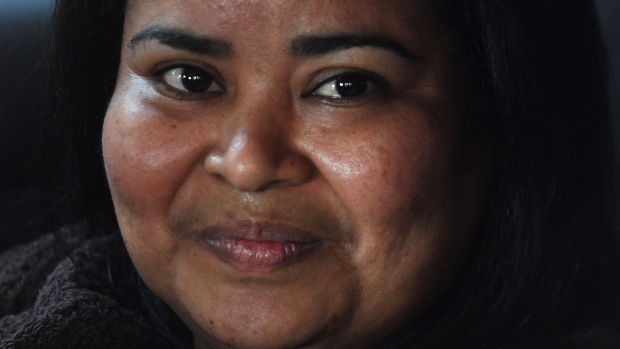 Maira Veronica Figueroa was a teenager when she lost her baby and was put behind bars under El Salvador’s strict anti-abortion laws.

“It’s been extremely difficult for her,” abortion rights advocate Kathy Boukher told As It Happens host Carol Off.

“Obviously, she’s a person who’s learned to make the best of it under really terrible conditions.”

Figueroa embraces her mother as she is released from jail thanks to a commuted sentence. (Jose Cabezas/Reuters)

Boukher works with the Citizens Group for the Decriminalization of Abortion, which petitioned the court to commute Figueroa’s sentence.

Figueroa’s release follows that of Teodora Vasquez, who was freed in February after spending more than a decade behind bars for an abortion-related crime.

But there are at least 24 other women in similar circumstances still languishing in jail, Boukher said, including Evelyn Beatriz Hernandez Cruz, who was jailed after she gave birth to a stillborn conceived during an alleged gang-rape.

“And there may be more that we don’t know about because it’s possible women who are there don’t want to reveal the nature of their conviction,” Boukher said.

These women, she said, were accused of inducing abortions, and wrongfully jailed for murder, when instead they suffered miscarriages, stillbirths or pregnancy complications.

Abortion has been outlawed in the Catholic-majority nation since 1997 even in cases of rape, incest, when the woman’s life is in danger or the fetus is deformed.

In cases where the fetus or newborn dies after 21 weeks of pregnancy, the court can upgrade the charge to homicide.

Kathy Boukher, left, of the Citizens Group for the Decriminalization of Abortion, helped advocate on behalf of Figueroa, right. (Submitted by Kathy Boukher)

Figueroa was 19 and working as a housekeeper when she went into labour and lost her child, Boukher said.

The homeowners took her to a public hospital, where doctors reported her to police.

“What happens much too frequently in public hospitals is that doctors see women who come in hemorrhaging who have given birth and immediately accuse them of having provoked an abortion,” Boukher said.

Doctors in El Salvador can face jail time themselves if they don’t report women they suspect of terminating their pregnancies.

Figueroa spent the next 15 years in a prison so overcrowded, Boukher said there were often two or three women to a bed, while others slept on the floor.

Figueroa embraces her father after her release from prison. (Jose Cabezas/Reuters)

“At times there is very derogatory treatment, particularly for women who have been convicted of these kinds of crimes. They’re often very mistreated by the guards in the prison and sometimes by the other inmates, the other women.”

In 2016, the country’s ruling party introduced a bill to allow abortion in cases of rape or a risky pregnancy, but no date has been set for a vote, and it will likely face tough opposition from the Catholic Church and evangelical groups.

Boukher said advocates are pushing for a vote before May 1, when a new and potentially more conservative government takes power.

She said it’s important to decriminalize abortion even though most of the women she works with are convicted of homicide.

An activist holds a sign reading ‘Legal Abortion’ during a march on International Women’s Day in San Salvador, El Salvador, March 8, 2017. Abortion is 100 per cent illegal in the country. (Jose Cabezas/Reuters)

“The impetus behind that law and the attitudes and the environment that have been created by that law is what has led to this situation where doctors and hospitals accuse women of abortion,” Boukher said.

“It’s all part of the same very unjust situation.”

Written by Sheena Goodyear with files from Reuters. Interview produced by Imogen Birchard.