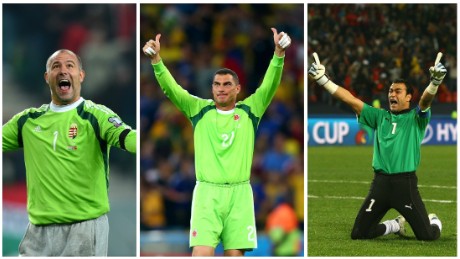 Now, with just 60 seconds of added time remaining, star player Mohamed Salah stepped up to take the penalty that could make or break his country’s World Cup dream.

Time seemed to slow as Egypt’s 27-year wait to reach football’s showpiece event came down to a single left-footed strike.

But Salah calmly dispatched the spot kick into the bottom-right corner and, at last, Cúper could relax — the Pharoahs had qualified for the FIFA World Cup for the first time since Italia ’90, topping Group E ahead of Uganda, Ghana and Congo with a game to spare.

“Tears were rolling from the eyes of everyone; the players, the staff on the bench, the security officers,” Mazhar tells CNN.

“This means so much for Egypt. We are making history.”

“This is an incredible achievement,” says author James Montague, who has traveled the globe documenting football’s intersection with politics.

“Egypt haven’t gone to a World Cup since 1990 and it has been a source of national shame that the Pharaohs had not qualified despite being arguably being the best team in Africa over much of the past decade.”

Qualifying for the World Cup is a significant achievement for a country whose national team suffered when the 2011-12 and 2012-13 domestic seasons were canceled following the Port Said stadium disaster and the 2013 coup d’etat.

Indeed, Egypt were competing at this year’s African Cup of Nations (AFCON) for the first time since 2011’s Arab Spring swept across the Middle East and North Africa.

Montague added: “As the country struggled with the revolution’s aftermath, we had the Port Said tragedy, the league was canceled, fans were banned from national team games. It was almost as if they would never make it. And then Mohammed Salah stepped up …”

Why age is just a number

As many as 90,000 supporters crowded into the Borg El-Arab Stadium near the Mediterranean port city of Alexandria for Sunday’s match. Salah’s parents even hired a bus to take people from his home town of Basyoun. Millions more watched in expectation at home.

But for one man, the Pharaohs’ wait to reach the World Cup has been source of particular torment.

When goalkeeper and captain Essam El-Hadary made his international debut in 1996, a number of his current teammates weren’t even born.

The 44-year-old has represented his country more than 150 times — only Italy’s Gianluigi Buffon, Spain’s Iker Casillas and Mohamed Al-Deayea of Saudi Arabia have played more international games between the sticks — and has won four AFCON titles, more than many countries.

“I won 37 trophies and I enjoyed some remarkable moments,” El-Hadary told FIFA.com. “The only thing missing for me is a World Cup appearance.

“I’ve always been very determined and persistent to carry on playing; this is my character. During my time at Al Ahly, (current Egypt goalkeeping coach) Ahmed Nagui told me I would stop playing after the age of 50.

“The fact that I still have a chance to play at the World Cup makes me even more motivated to continue playing to realize this dream.”

Should El-Hadary be selected by Cúper at Russia 2018, he will be 45 years old and the oldest player in World Cup history.

Twelve hours after the final whistle, much of Cairo’s population still hasn’t slept.

The national team is meeting with Egypt’s president, Abdel Fattah el-Sisi, and all players are set to receive one million Egyptian pounds ($57,000).

The wait is over.

Nigeria has also qualified for Russia 2018, with Africa’s remaining three places to be decided in November.