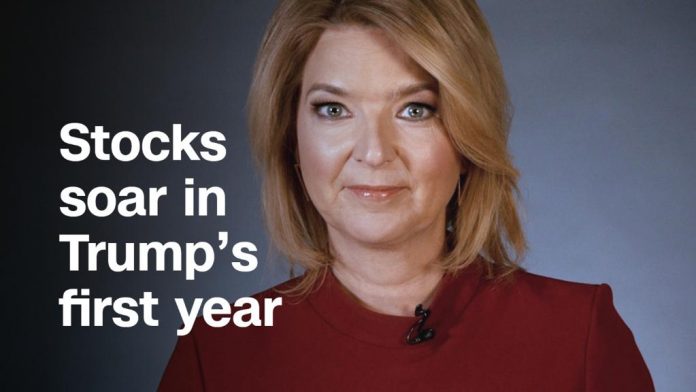 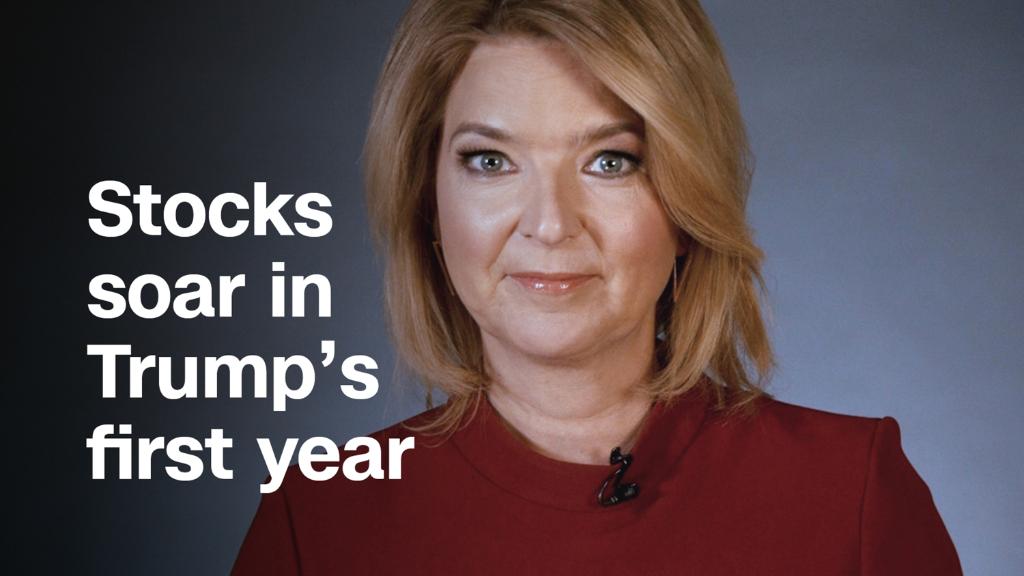 And just like that, Wall Street is celebrating another milestone: Dow 24,000.

The Dow soared 332 points on Thursday as investors cheered signs that the Senate is making progress on a package of tax cuts. The 1.4% surge was the Dow’s best since March 1.

The latest market milestone occurred barely a month after the Dow hit 23,000.

It’s yet more evidence of excitement among investors about the strengthening economy and record corporate profits that could be bolstered by the GOP plan to slash corporate taxes. The tax cut plan received critical support on Thursday from Republican Senator John McCain.

The S&P 500 and Nasdaq are also near all-time highs. The latter is up a whopping 30% since the election.

“Investors are feeling golden,” said Sam Stovall, chief investment strategist at CFRA Research. “Until you get signs that this economy is likely to roll over and die, investors believe stocks remain the place to be.”

The boom in the stock market is a clear reflection of improvements in the U.S. economy. New numbers published on Wednesday show the U.S. grew at a brisk 3.3% pace between July and September, the best growth since 2014 and the second-straight quarter of 3% growth.

The global economy is also gathering momentum. Most major countries are growing at the same time for the first time in years.

All that has supercharged the optimism on Wall Street about corporate profits, which are what ultimately drive stock prices. Earnings have been strong all year, and analysts are ratcheting their predictions for next year higher.

Related: Goldman Sachs: Markets haven’t been this pricey since 1900

Stocks caught fire again this week as the U.S. Senate made progress on a bill that would slash the corporate tax rate in 2019 to 20% from the current 35%. The Senate Budget Committee advanced the tax bill on Tuesday, setting the stage for a high-stakes vote in the full Senate.

Even those who don’t think the tax plan will provide a lasting boost to the economy acknowledge it should help the stock market.

More good news for investors: Jay Powell has signaled he won’t rock the boat at the Federal Reserve. Powell, Trump’s pick to replace Janet Yellen at the helm of the Fed, gave support this week for raising rates at just a gradual pace. Extremely low rates have underpinned the bull market by forcing investors to bet on risky assets like stocks.

Powell also said he believes existing bank regulation is tough enough. Instead, he expressed a desire for “appropriate ways” to ease some rules.

Talk of higher rates and lighter regulation led to another round of buying for big banks like Bank of America (BAC), Wells Fargo (WFC) and Citigroup (C).

So how long will stocks stay hot, and will they eventually pull back, or at least pause? Keep in mind the S&P 500 is in the midst of its longest rally ever without a 3% slump, according to Bespoke Investment Group.

While investors enjoyed “exceptional returns” in 2017, Morgan Stanley warned in a recent report that “such calm is likely to wane in 2018” as earnings growth peaks. The investment bank predicted a slowdown in profits will “inevitably will bring some heartburn for investors.”

The problem is that markets may be priced for perfection. Stocks, bonds and credit haven’t been this expensive since 1900, according to Goldman Sachs.

“All good things must come to an end,” Goldman strategists wrote.

The key will be how long the economic recovery from the Great Recession lasts. While it’s already one of the longest expansions on record, many economists anticipate growth will continue, if not accelerate, in 2018.

“Bull markets don’t die of old age,” Stovall said. “They die of fright, and what they’re most afraid of is recession.”