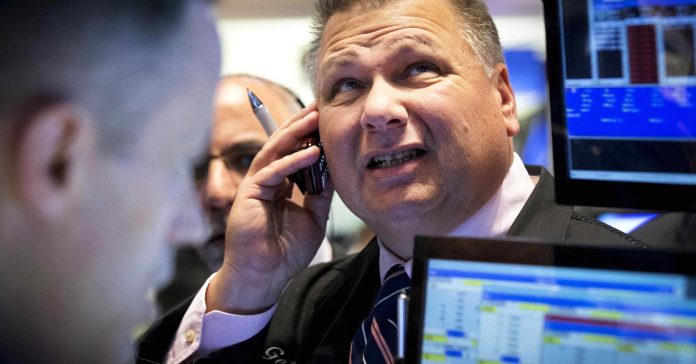 “This volatility is the norm not the exception now,” said Art Hogan, chief market strategist at B. Riley FBR. “It’s the perception of what tariffs mean … right now we’re focused on significant tariffs on Chinese goods.”

A source told CNBC on Tuesday that Washington is contemplating a trade package that would include investment restrictions, indefinite tariffs and potentially even visa restrictions on Chinese travelers.

Trump tweeted on Wednesday: “We cannot keep a blind eye to the rampant unfair trade practices against our Country!”

Last week, Trump signed two declarations to impose tariffs on steel and aluminum imports — both are expected to take effect in the coming weeks. While Canada and Mexico are exempt from the deal, fears over a potential trade war remain, as investors worry that countries around the world may impose their own retaliatory tariffs.

The moves Wednesday come after a choppy trading day Tuesday, with the Dow closing down more than 150 points, the index’s worst session since March 1. Tech shares helped lead the declines, with the sector dropping more than 1 percent.

“Certainly the stock market is being supported by the economy and earnings being in double digits this year,” said Bruce Bittles, chief investment strategist at Baird. “I’d say the one problem area is the technical situation and that the rally is getting more narrow … That would suggest we may have another retest of the February lows before this is all over.”

But as for political news on trade and a possible trade war, Bittles said that those worries are likely “overstated.”

“It’s kind of a mixed bag. You’ve got retail sales missing expectations and PPI and business inventories coming in line,” said Randy Frederick, vice president of trading and derivatives at Charles Schwab. “We seem to be in a consolidation phase this week.”

In corporate news, Ford Motor Company’s stock rallied more than 3 percent after Morgan Stanley upgraded the company to overweight from underweight. The bank sees more potential in the American motor vehicle company following “significant changes” to senior management at the company and its efforts to improve its global portfolio.

Shares of Qualcomm fell more than 1 percent after Broadcom announced that it is formally ending its hostile bid for the American chipmaker. Qualcomm stock fell nearly 5 percent Tuesday after Trump ordered Broadcom to abandon the deal.