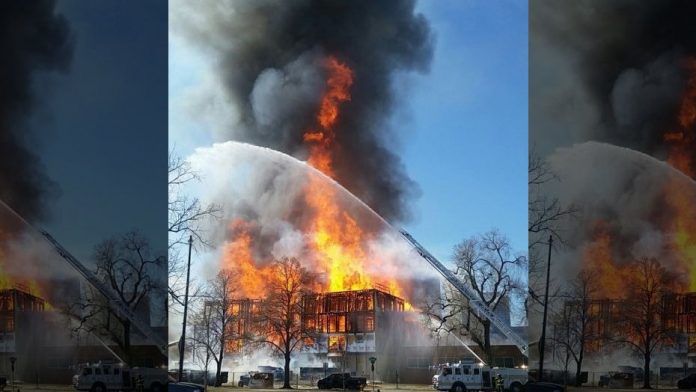 Dozens of investigators, including agents from the federal Bureau of Alcohol, Tobacco, Firearms and Explosives, visited the site of the blaze in the North Capitol Hill neighborhood, Denver’s Fox 13 reported.

The cause of the fire is still unknown or not yet released.

Two construction workers died, and at least six other people were injured, including one Denver firefighter, the report said.

More than a dozen construction workers from organized carpenter groups gathered at the site and voiced their concern about dangerous working conditions, the station reported.

“What has happened here is unacceptable,” said Mark Thompson of Colorado Carpenters. “People need to be held accountable … who is responsible and how could this have been avoided.”

“What has happened here is unacceptable. People need to be held accountable … who is responsible and how could this have been avoided.”

Local labor organizers told the Denver Post that there is evidence that at least one subcontractor employed workers who were paid under the table and not signing daily work logs, making it difficult to account for all the people on site.

“When I approached the foreman for United Builders Service, I asked him how many workers he had on his crew. He looked me straight in the eye and said, ‘I don’t know,’” Thompson said at Friday’s rally. “We pray there are no other workers missing, but how can the professionals be certain without an accurate count to start with?”

United Builders Service officials declined to respond to the allegation that it paid workers under the table, while the construction site project’s general contractor, Vertix Builders Inc. called the allegation “patently false” in a statement obtained by the Post.

“We are committed to determining the facts and working with investigators to establish the cause of this incident,” the statement reads.