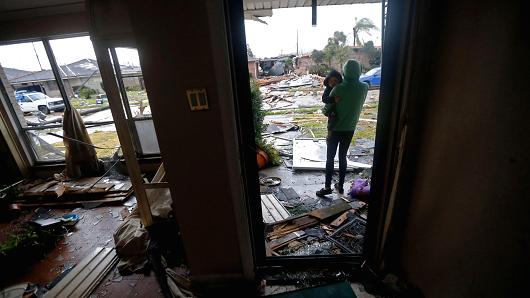 Eshon Trosclair holds her son Camron Chapital after a tornado tore through home while they were inside the New Orleans East neighborhood in New Orleans, Tuesday, Feb. 7, 2017.

At least four tornadoes ripped across Louisiana on Tuesday as a violent weather system barreled across the South.

Damage was reported across the New Orleans area, the city’s emergency management agency tweeted. Injuries have been reported as well, according to a tweet from Project NOLA.

Another touched down near the town of Donaldsonville and another in the town of Killian, the National Weather Service said.

Tornado watches remained in effect across large portions of Louisiana and Mississippi as a line of thunderstorms moved through, prompting multiple tornado warnings.

The Storm Prediction Center in Norman, Okla., said 2.7 million people in parts of Louisiana, Mississippi and Alabama remain at the highest risk of severe weather Tuesday. The area includes New Orleans, Gulfport, Miss., and Mobile, Ala.

@katiecmoore: Exclusive video of a roof getting blown off, 18 wheeler flipping over off Cold Storage Rd

@CoachTonyHull: I was driving in NO & a tornado hit in the east. Please pray for this great neighborhood!