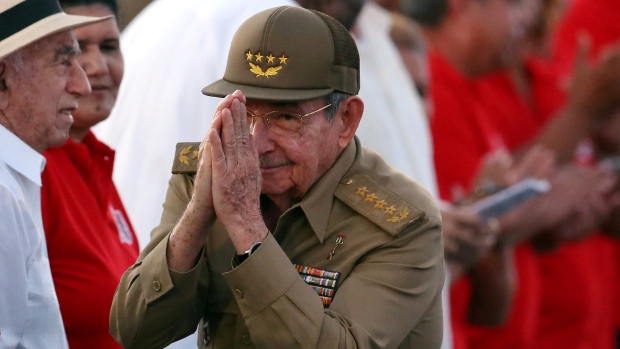 Cubans went to the polls on Sunday in a vote for their legislative representatives, the last step before a new president is selected next month, as the Communist-ruled island prepares to be led for the first time since the 1959 revolution by someone whose last name is not Castro.

Cubans will elect the 605 members of the National Assembly and 1,265 delegates to 15 provincial assemblies. The government depicts the vote, which takes place every five years, as a symbolic show of unity in the face of U.S. hostility.

The candidates in the election are chosen by government-linked organizations, including municipalities, based on criteria such as their “merit, patriotism, ethical values and revolutionary history.” Not all are members of the Communist Party, though most are.

This year, though, the new national assembly will select a president to replace 86-year-old Raul Castro on April 19. Starting with Raul’s late older brother Fidel, the Castros have ruled the Caribbean island for nearly six decades.

Leaders of the Cuban exile community in the United States, including Republican U.S. Senator Marco Rubio, have called on President Donald Trump not to recognize the election results, saying the process is a fraud designed to legitimize a dictatorship.

Raul Castro voted with little fanfare at dawn in the foothills of the Sierra Maestra mountains in southeast Cuba, where he had led a group of guerrillas during the revolution.

Castro, who succeeded his brother as president in 2008, is expected to remain at the helm of the powerful Communist Party while First Vice-President Miguel Diaz-Canel, 57, is expected to become president.

Diaz-Canel, a party functionary since his youth, would be Cuba’s first modern head of state who was born after the revolution and has no military history.

In central Villa Clara province, where Diaz-Canel grew up and was head of the Communist Party, the candidate and his wife voted alongside local residents, smiling and chatting with them.

He told reporters the election signalled that Cubans wanted to defend their independence, and criticized the Trump administration for undermining a fragile détente established under former U.S. president Barack Obama.

“Relations with the United States have been deteriorating … due to an administration that has offended Cuba, strengthened the blockade against Cuba, returned to the rhetoric of the Cold War and adopted measures that offends and harms millions of Cubans and North Americans,” Diaz-Canel said after casting his ballot.

But Rafael Hernandez, one of Cuba’s leading political analysts and editor of the magazine Temas, said if Diaz-Canel becomes president, he will not have the same moral authority as the “historic generation” of revolutionary leaders. He will have to establish his legitimacy by addressing voters’ concerns and raising living standards.

In this undated image, Natalia Bolivar is shown talking with Fidel Castro who died Nov. 25, 2016. Castro and his brother Raul have ruled the Caribbean island for nearly six decades. (Submitted by Natalia Bolivar)

The task will be more challenging at a time when aid from ally Venezuela has fallen, relations with the U.S. have deteriorated, and efforts to modernize the economy and introduce market reforms have dragged due to what the government admits is a lack of preparedness.

“For many Cubans, elections have never represented change,” said Rafael Padron, 37, a personal sports trainer in Havana. “But this is a key moment.”

More than eight million Cubans are eligible to vote and turnout is traditionally around 85 per cent.

The parliamentary candidates, selected by party-controlled commissions, include Raul Castro and two men who fought with him in the mountains during the revolution: Vice presidents Jose Ramon Machado Ventura, 87, and Ramiro Valdes, 85.

Castro has said he will step down as president at the end of his second five-year term in April, but will continue as a National Assembly deputy.

Many analysts expect his fellow revolutionaries to retire from the government, marking a generational shift.

“We don’t know what will happen exactly,” said Arnaldo Betancourt, 52, who sells handicrafts in Havana, “but people want to see new things, a change for the better.”