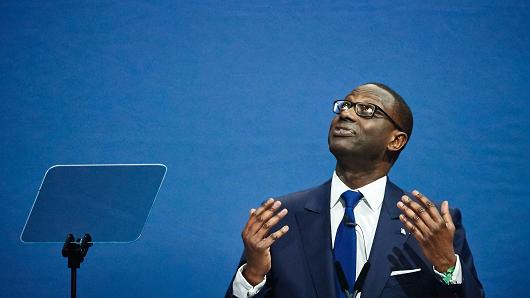 Credit Suisse CEO Tidjane Thiam delivers a speech during the annual shareholders’ meeting of the Swiss banking group on April 28, 2017 in Zurich.

Credit Suisse on Thursday announced ambitions to pare costs beyond 2018, as Chief Executive Tidjane Thiam builds on a revamp of the Swiss lender the bank says will be completed that year.
In a statement ahead of its investor day, Credit Suisse said it is aiming for a return on tangible equity of 10-11 percent in 2019 and 11-12 percent in 2020.

This is the first time it has announced such goals since Thiam’s restructure – which has refocused the bank more towards wealth management and less on volatile investment banking – began in late 2015, and represents a major rise from the 4.1 percent return posted in the first nine months of 2017.

It confirmed 2018 targets for all its units.