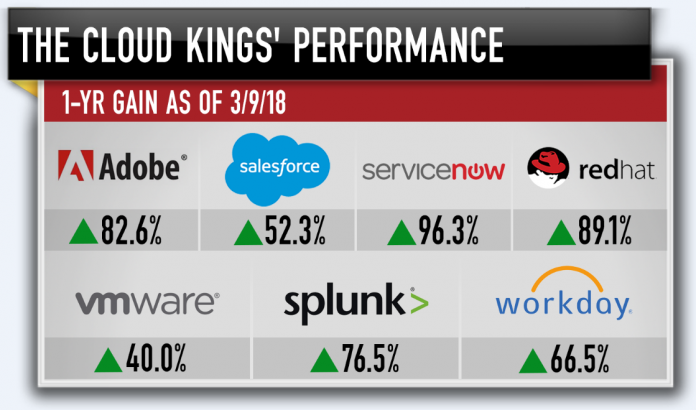 Since CNBC’s Jim Cramer is in San Francisco this week, he wanted to go over a new stock group in technology space that’s just refusing to quit.

“I’m calling them ‘the cloud kings,’ the seven software companies that are transforming the way their customers do business,” the “Mad Money” host said on Monday. “I’ve been telling you about the cloud revolution for years now, … but the truth is it’s still in its early stages, which is why I still like the seven kings of the cloud: Adobe, Salesforce.com, ServiceNow, Red Hat, VMware, Splunk and Workday.”

In addition to their cutting-edge tech, these companies’ stocks have been wildly strong performers, Cramer said. Shares of all seven have rebounded between 17 and 30 percent since the market’s Feb. 9 lows.

Here are their one-year gains: 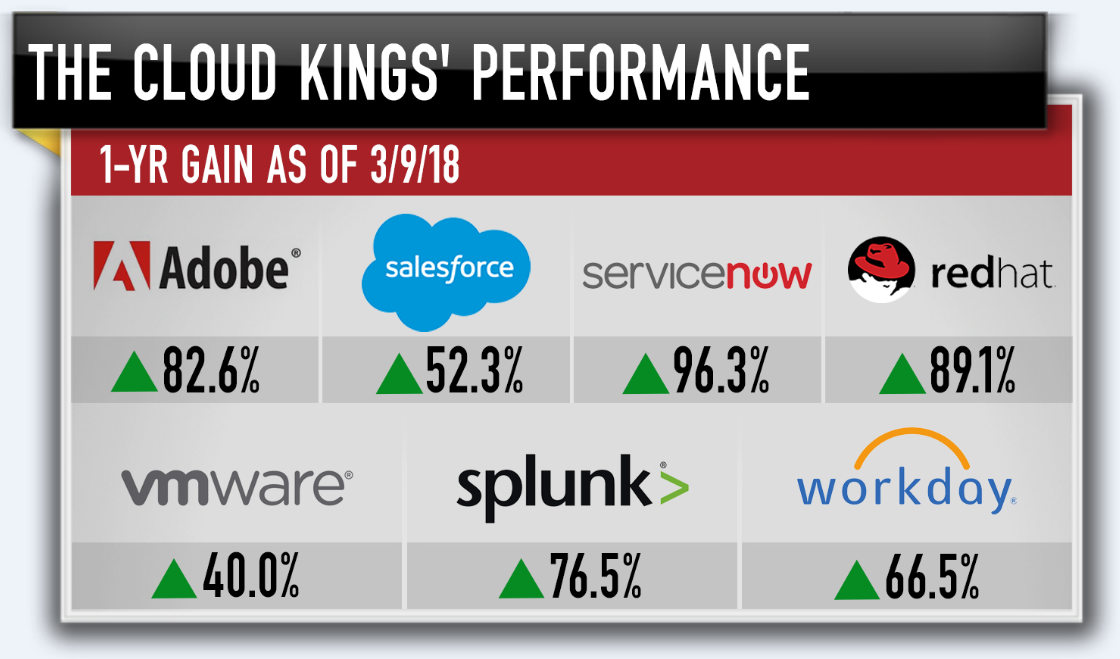 “In many cases, their stocks are indeed expensive up here. The kings come at a cost,” Cramer acknowledged. “Regular viewers know I do hate to chase. But on the rare occasions when these names give you a dip, they have been fabulous outright buys.”

To convince investors why macro-economic or geopolitical worries shouldn’t weigh on this part of the cloud, Cramer went over each cloud king’s track record and explained what made it a worthy buy.

“When it comes to digital media and marketing software, Adobe is in a league of its own,” the “Mad Money” host said. “This company has a terrific long-term track record, but the stock really took off a couple of years ago after Adobe began to transition from an old-school, on-premises software company to a modern, cloud-based, software-as-a-service business.”

Adobe’s transformation to charging its customers on a subscription basis has “turbocharged” its earnings growth, Cramer said.

He hoped that the company’s Thursday report would miss on a minor line item so that investors could buy into the stock, which hit a new all-time high on Monday, at a lower level.

Next, Cramer turned to Salesforce, which he called “the king of the cloud.” The company helps enterprises better understand their customers with a range of tools spanning marketing, e-commerce, community management, analytics, application development and professional cloud services.

“I wouldn’t be surprised if the future looks just as bright now that Salesforce is using artificial intelligence to better predict consumer behavior,” Cramer said, referencing the company’s Einstein tech. But, he warned, “the stock has run dramatically and I’d like it a heck of a lot more on a pullback.”

“Right now, the company gets a ton of credit for its IT services division, but I think the rest of ServiceNow, all the auxiliary businesses that involve automating back-office jobs, is the real future of the company,” Cramer predicted. “However, this is another one that just made a record high today, so please be patient. Put it on your shopping list. Wait for a better entry point.”

Red Hat, the fourth on Cramer’s list, is the top open-source enterprise software provider in the world, assisting companies in their transitions to the cloud.

Recently, Red Hat has started helping enterprises build out their own private cloud networks, which offer faster, more secure access to their information.

“The growth has really taken off since they made this move,” the “Mad Money” host said. “Red Hat reports in two weeks and Wall Street has a history of misunderstanding this company’s results, causing the stock to get hit. It got hit really badly last time. Let’s hope that happens again. These dips have made for excellent buying opportunities.”

In an aside, Cramer said that he would anoint VMware, another cloud onboarding play, to his list of cloud kings if the company wasn’t publicly involved in deal talks with Dell.

The last two cloud kings were “phenomenal growers” Splunk and Workday. Splunk helps companies analyze and use their data in the best way possible, while Workday, like ServiceNow, focuses on making human resources and finance departments more efficient.

“The bottom line? When you identify a powerful theme that’s revolutionizing the way we do business, find the biggest winners, wait for a good entry point and then hang on for the ride,” Cramer said. “Adobe, Salesforce.com [with CEO] Marc Benioff, ServiceNow, Red Hat, VMWare, a little convoluted ownership structure there, Splunk and Workday — they are the kings of the cloud and they all belong on your stock market shopping list.”