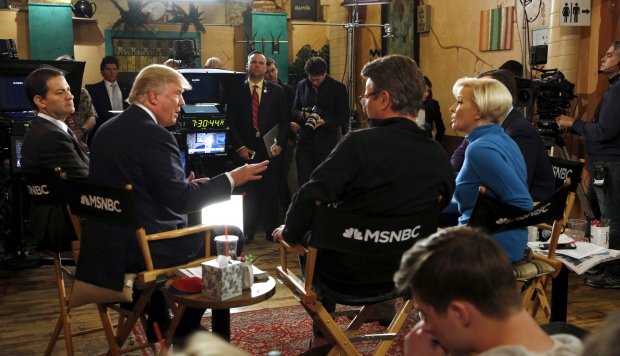 There’s more to The Morning Joe/Donald Trump spat than was apparent when the U.S. president launched his Twitter attack at the show’s hosts on Thursday. New details add context to the story that make it both curiouser and curiouser and muckier and muckier — not to mention worrisomer.

On their MSNBC show and in a Washington Post op-ed on Friday, host Joe Scarborough and his on-air/off-air partner Mika Brzezinski suggested that the White House had tried to blackmail them earlier this year.

They said that “top White House staff” had warned them that the National Enquirer supermarket tabloid was ready to publish a “negative article” about them unless they “begged the president to have the story spiked.”

“We ignored their desperate pleas,” they wrote.

On air, Brzezinski said people who she believed were National Enquirer staff even harassed her children with phone calls.

Earlier this month, the Enquirer did, indeed, publish a story about the infidelities of Scarborough and Brzezinski under the headline “Morning Joe Sleazy Cheating Scandal!”

But after Friday’s program, an executive with the Enquirer’s parent denied the story had anything to do with the White House.

“We have no knowledge of any discussions between the White House and Joe and Mika about our story, and absolutely no involvement in those discussions,” said Dylan Howard, chief content officer and vice-president of American Media.

But it seems there was some kind of discussion, at least at high levels of the White House.

New York magazine reports there was an exchange of text messages between Scarborough and Trump’s son-in-law, Jared Kushner. Kushner apparently said the president would get the Enquirer story spiked if Scarborough called him to apologize for his show’s negative coverage of him.

Trump acknowledged something was going on when he tweeted about Scarborough that, “He called me to stop a National Enquirer article. I said no!”

Scarborough tweeted back, “Yet another lie. I have texts from your top aides and phone records.”

Watched low rated @Morning_Joe for first time in long time. FAKE NEWS. He called me to stop a National Enquirer article. I said no! Bad show

Why do you keep lying about things that are so easily disproven? What is wrong with you? https://t.co/aAoUj5HYZS

The possibility that Trump could pick up the phone and spike a story at the National Enquirer is not the least fanciful. In fact it’s almost a certainty.

Trump is much admired by American Media CEO David Pecker. They have known each other for decades. Pecker launched a magazine about Trump in 1997 called Trump Style that flattered his man in the glossiest ways.

With his uncanny, Forrest Gump-like sense of the right place at the right time, New Yorker writer Jeffrey Toobin has a profile of Pecker in the magazine’s July 3 issue.

He describes a man almost in awe of wealth who takes a hands-on approach to what the tabloid he controls does and does not cover.

Guided by Pecker, the Enquirer went after Hillary Clinton last year with a special investigation under the headline: “HILLARY: CORRUPT! RACIST! CRIMINAL!”

It has covered the Trump presidency with front page stories such as: “TRUMP TAKES CHARGE! SUCCESS IN JUST 36 DAYS!”

Toobin quotes another media magnate, Gus Wenner, as saying Pecker told him, “very bluntly that he had killed all sorts of stories for Trump.”

Pecker denied saying that, but as Toobin points out, it fits with a Wall Street Journal story last year about a former Playboy model who alleged she’d had a months-long affair with Trump.

The Journal said Pecker hired the woman, paid her $150,000 and told her that now she was on the payroll she couldn’t be “bashing” Trump.

All of it raises unsettling questions: If Trump could get the Enquirer to spike a story, could he also get the tabloid to go after one too? Can he use it to go after his enemies?

An NBC News spokesman said that “Joe and Mika kept senior executives apprised as the events unfolded,” which adds credibility to their version of the story. But it also raises its own questions.

Since the election, Morning Joe has been the most critical — and at times personal — of the MSNBC shows when it comes to covering the president. It is a “point of view” show. But the hosts have portrayed themselves as genuinely disturbed by the president and his impact on the country.

Now that we know that’s not the whole story we must wonder whether they have been publicly settling some private scores of their own.​