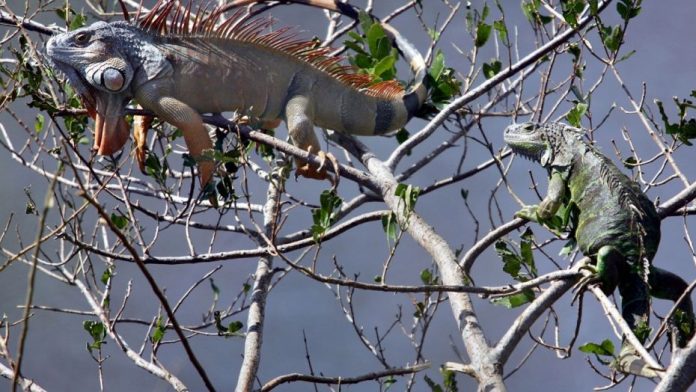 FILE: A team of researchers from the University of Florida are using a controversial method to kill invasive iguanas.

Researchers are taking a controversial approach as they try to rid Florida of invasive iguanas overtaking residents’ yards by bashing in their brains.

A team from the University of Florida is using a captive bolt gun that sends a bolt into the brain, similar to what’s used in the livestock industry. They’re also smashing the creatures’ heads against solid objects to cause blunt force trauma. They’ve killed 249 so far.

“Most of what we’re doing is blunt force trauma,” Ketterlin told the paper. “Hitting their head very hard against a solid object.”

The theory goes that by destroying their brains is the most painless option, hence humane.

Their work is part of a research project contracted by the Florida Fish and Wildlife Conservation Commission. Officials say iguanas are an invasive species that feed on native plants and wildlife.

Veterinarian Dr. Susan Kelleher says the head-bashing method is cruel. She suggests sedating and then euthanizing them.

Gary Fishman, who lives in Boyton Beach, uses his pellet gun to kill iguanas that enter his landscape.

“The iguana does not belong here,” he told the paper. “They need to be annihilated. They can’t be relocated. So they must be destroyed.”

Fishman told the paper that bashing the iguanas’ heads “sounds like torture.” He opts for the pellet gun.