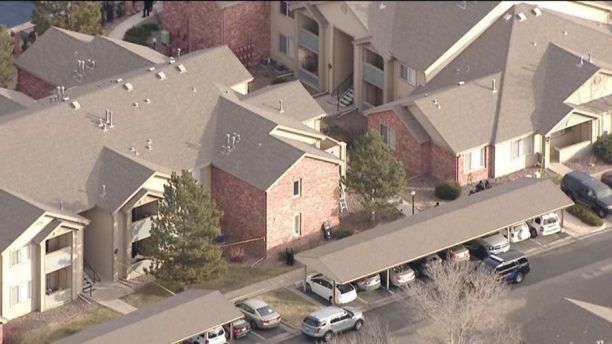 The suspect had fired off around 100 rounds with a rifle at the Copper Canyon apartment community in Highlands Ranch, Douglas County Sheriff Tony Spurlock said.

“They all went down, almost within seconds of each other,” Spurlock said.

The unnamed suspect, who died during the attack, was known to law enforcement, Spurlock said. He did not reveal exactly how the suspect died.

Spurlock identified the deceased officer as 29-year-old Zackari Parrish, who had been on the force there for seven months.

Parrish is survived by his wife and two children and previously worked for two years at the Castle Rock Police Department.

The other wounded officers: Deputies Mike Doyle, 28; Taylor Davis, 30; Jeffrey Pelle, 32; and Tom O’Donnell, 31, were said to be in stable condition. The civilians had suffered non-life threatening injuries, Spurlock said.

Police previously said residents of the area should shelter in place and avoid windows. Multiple law enforcement agencies and a SWAT team responded to the scene.

Local media later reported gunshots being heard amid a stream of firetrucks and emergency vehicles entering the area.

Steven Silknitter, who lives in the complex, told the Denver Postthat he was working elsewhere when he got word of the shooting and called home to speak to his fiance.

“She was pretty scared,” Silknitter said. “She kept saying how loud it was.”

President Donald Trump tweeted that he has offered his “deepest condolences to the victims of the terrible shooting.”