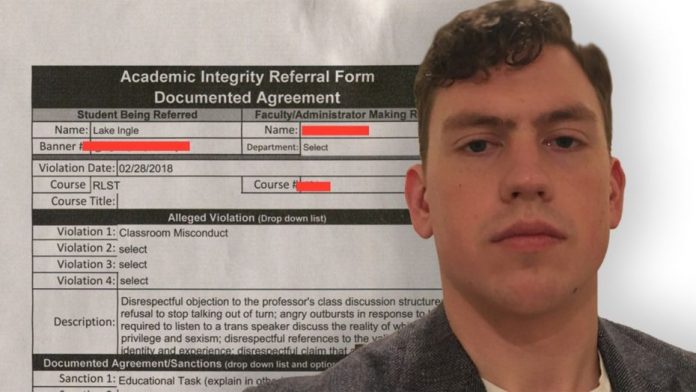 Indiana University of Pennsylvania student, Lake Ingle, was barred from class for speaking as a man and refuting his professor’s claims.

A religious studies major was barred from Christianity class at Indiana University of Pennsylvania for saying during class that there are only two genders.

Lake Ingle, a senior at the university, said he was silenced and punished by IUP Professor Alison Downie for questioning her during a Feb. 28 “Christianity 481: Self, Sin, and Salvation” lecture.

After showing a 15-minute TED Talk by transgender ex-pastor Paula Stone Williams discussing the “reality” of “mansplaining,” “sexism from men,” and “male privilege,” the professor asked the women in the class to share their thoughts. When no women in the class said anything, Ingle spoke up, challenging the professor on biology and the gender wage gap.

He told the class that the official view of biologists is that there are only two genders.

The feminist professor booted him from class and asked him not to come back. She referred him to the public university’s Academic Integrity Board (AIB). Ingle needs to complete the class to graduate at the end of the semester.

“You are barred from attending this class in accordance with the Classroom Disruption policy,” IUP Provost Timothy Moerland told Ingle in a March 2 letter. 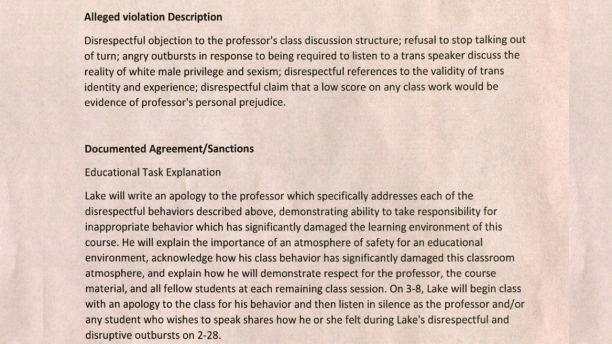 Dr. Alison Downie referred student, Lake Ingle, to IUP’s Academic Integrity Board, originally asking for a forced apology and an opportunity to silence and lecture him. She eventually decided to banish him from class.

Ingle said what the professor did was unconstitutional.

“My professor is violating my First Amendment rights because of the fact that my views and ideology is different from hers,” Ingle told Fox News. “So she took it on herself to silence and embarrass me – bully me – for speaking up in class.”

Downie accused the conservative libertarian student of “disrespectful objection,” “refusal to stop talking out of turn,” “angry outbursts in response to being required to listen to a trans speaker discuss the reality of white male privilege and sexism,” and “disrespectful references to the validity of trans identity and experience.”

Ingle doesn’t see this as a transgender, women’s rights, or wage issue, but rather as free speech and an example of the constant misuse of intellectual power at universities.

“It is my firmest belief that every human being has the freedom and right to identify, dress, and represent oneself as they see fit,” Ingle said. “I think this is all an attempt to silence my views personally because they contradict the ones she pushes in class so evidently.”

Ingle objected to Downie’s “overall abuse” as a professor “indoctrinating” students because she won’t listen to the other side of a controversial argument.

“You can’t say that anecdotal evidence is fact,” Ingle said. “My professor pretty much just tried to shut me up because she was just letting women speak. I brought up the fact that biologists don’t agree that there’s more than two genders and I said the wage gap she’s referring to – 77 cents on the dollar – that even the New York Times debunked that.”

Downie and Ingle had an AIB hearing Friday, with a ruling set for March 19.

If the board rules against Ingle, he won’t graduate in May. Regardless, he plans on someday becoming a professor.

“When you see that kind of misuse of intellectual power, you want to be the person that comes back and does it responsibly and with morals,” Ingle said. “Instead of being the purveyor of your ideology, you can be an educator.”

The university was unable to comment due to student education records, and Downie did not immediately respond to requests for comment.