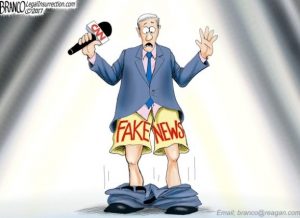 A CNN producer and a top on air talent were both caught on hidden camera admitting the so-called Trump collusion story was a “nothing burger,” “pretty much BS” and was being followed “because of ratings.” Project VERITAS produced the videos that aired just after CNN was forced to retract and take down a false story on a Trump supporter and friend. A $100 million lawsuit was reportedly threatened, and the story was quickly taken down. Apologies were made by CNN after some involved with the story were forced to quit. It appears none of the bosses in charge took any of the blame.

The U.S. dollar continued to sink in value. It was down in value a half percent in a single day on Thursday. Gregory Mannarino of TradersChoice.net says a declining U.S. dollar is desired by the Treasury Department and the Federal Reserve. The idea is to pay back borrowed dollars with devalued currency. Mannarino thinks they will continue to “kill the dollar,” which will cause more inflation for “We the People.”

There are earthquakes happening around the Yellowstone Caldera, and some 800 have recently been detected. This worries scientists because the Caldera has been dormant for hundreds of years. Scientist say if Yellowstone blows, it could kill 90% of the people living within 600 miles. Of course, the mainstream press is so worried about following the false narrative of the Trump/Russia collusion story they fail to report things like Yellowstone and the potential problems.

Analyst Lynette Zang from ITM Trading will be the guest for the Early Sunday Release. Zang, who has deep Wall Street experience, contends that another crash is close at hand because the wealthy are exiting the stock and bond markets in droves. Don’t miss it.