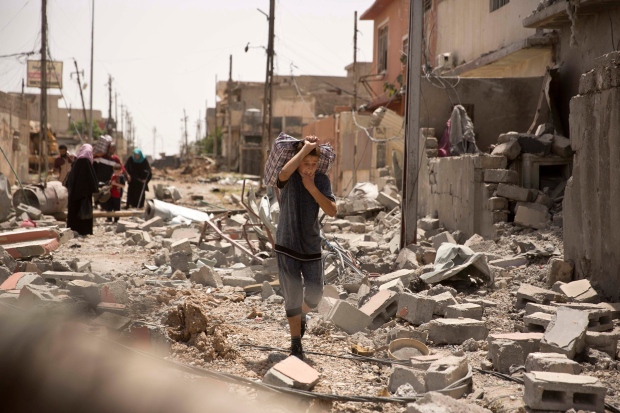 The United National humanitarian co-ordinator in Iraq says civilians are being hit hardest as the military assault against ISIS militants in Mosul enters its final phase.

Lise Grande has condemned ISIS for using civilians to shield themselves from attack. ​She says families who are already facing severe shortages of water and electricity are now in extreme danger.

“All of the evidence points to the fact that the civilians who are trapped in these neighbourhoods and districts are in grave danger.”

A boy carries heavy belongings through the rubble as he flees fighting between Iraqi special forces and ISIS militants in western Mosul on May 15. (Maya Alleruzzo/Associated Press)

On Saturday, Iraqi forces said they had made significant strategic gains in an offensive to force ISIS militants out of western Mosul

They began a new offensive to recapture Mosul’s Old City from three directions. Hours after announcing the push, the government said two military officers were killed in clashes in the Shafaa neighbourhood on the Tigris River.

The officers described the advance as “cautious” and the clashes on Sunday as “sporadic.”

Mosul’s eastern half was declared liberated in January and the push for the city’s west began the following month.