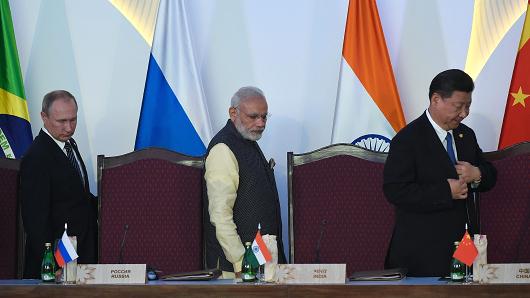 However, China’s Foreign minister Wang Yi said Wednesday that he saw “huge potential for cooperation between India and China.”

The BRICS leaders will be joined by leaders from guest countries. These include Egypt, Kenya, Tajikistan, Mexico and Thailand. Yi has been floating the idea of expanding the economic grouping since March this year, under the title ‘BRICS Plus’, but he insisted that the guest invitations would not imply membership.

“We need to have some further explanation about the BRICS Plus to help people better understand the rationale of this idea,” Yi noted.

BRICS countries are often seen as bellwethers to growth in their respective regions, leading the development of science and technology, the economy and society in neighbouring countries.

“The close cooperation of the BRICS countries will increase the say of developing countries on international political, economic and science and technology affairs, promote timely sharing of their respective experience, accelerate their economic transformation, and provide new drivers to the global economic growth,” Huang Wei, author of the BRICS Innovation Competitiveness Report 2017 wrote in the report.

The BRICS countries represent more than two-fifths of the world’s population and occupy just under a third of the earth’s territory. Together, they account for 23 percent of the world’s overall GDP and 16 percent of global trade.