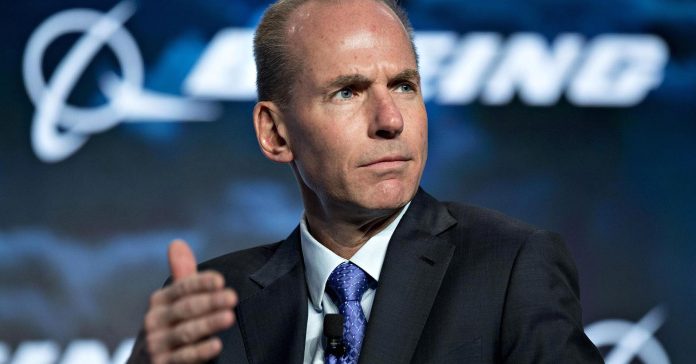 If China decides to respond to President Donald Trump’s reported wish to slap $60 billion of tariffs on Chinese goods, the path to revenge could begin with Boeing, the darling of the rising stock market on which Trump has staked his claim to economic credibility.

The Chicago-based maker of airplanes for both military and civilian use contributed 24 percent of the gain in the Dow Jones Industrial Average since December 2016, said Howard Silverblatt, senior industry analyst for Index Investment Strategy for S&P Dow Jones Indices. More than 1,200 points of the Dow’s rise stems directly from the 117 percent jump in Boeing stock since then.

And no member of the Dow may have quite as much to lose as Boeing, which announced a $37 billion order for 300 planes from China while Trump was in Beijing last year. That announcement was criticized as simply republicizing old orders to make the president appear to be getting results from the trip. In addition, Boeing has estimated that China will buy as much as $1 trillion of aircraft over the next 20 years, in a bullish forecast released last September. And the government’s heavy influence over putative independent Chinese businesses makes those orders vulnerable to political winds.

Boeing, with 140,000 employees worldwide, says 1 out of every 4 jetliners rolling off its assembly lines is being bought up by Chinese customers. The aircraft maker has been jostling with European rival Airbus for market share in the world’s fastest-growing aviation market, with both opening assembly plants in the country.

“What you do not want to see is Donald Trump dare Xi Jinping to get into a blazingly stupid tit-for-tat trade war,” said Bernard Baumohl, chief global economist at the Economic Outlook Group. “Trump’s trigger-happy use of tariffs against the second-largest economy in the world would quickly backfire on the U.S. China can shut down current imports of American-made planes, cellphones, nuclear reactors, autos, financial services, agricultural products and crude oil as well as refined products.”

Trump’s steel and aluminum tariffs can blow up NAFTA

Indeed, the Dow offers a target-rich environment for Chinese retaliation even beyond Boeing.

Apple makes most of its iPhones through subcontractors in China, and cellphones imported from China account for the largest part of the $375 billion merchandise trade deficit the United States ran with China last year. Intel, Caterpillar and Cisco are also major exporters to China and nations that depend on Chinese trade.

“China has lots of ways to hit back, and they don’t necessarily have to do it by putting on tariffs,” said Joel Naroff, president of Naroff Economic Advisors in Holland, Pennsylvania. “They can tweak regulations, squeeze inspections and a whole lot of other things. But they will likely do what Europe is planning on doing: hitting high-visibility imports that hurt Trump political supporters. The farm belt could shrivel up. They will be mean and nasty.”

The impact could be indirect as well as direct, affecting both Boeing and the market at large, said Moody’s Analytics chief economist Mark Zandi.

“The most likely Chinese response would be to devalue the yuan. They could calibrate yuan devaluation to negate the impact of any increase in U.S. tariffs on their trade with the U.S.,” Zandi said. “Alternatively, the Chinese could stop investing in U.S. Treasurys and other securities. This would cause U.S. interest rates to spike and financial markets to swoon. Of course, Chinese investments in the U.S. would also suffer, but they may be willing to suffer the economic pain [to gain] retaliation.”

The move comes as Trump prepares to visit Boeing’s factory in St. Louis today, following up on an earlier visit to Boeing’s plant outside Charleston, South Carolina. And it is the latest step in a tangled relationship that has featured the president using Boeing as a foil, for leverage against other defense contractors, and as a punching bag.

Trump’s public back-and-forth with Boeing began before he was president, when he criticized the company’s 787 jetliner and claimed on Twitter that he was buying Boeing shares in 2013 because it had slumped due to poor reception of the 787. (Boeing shares have risen every year since 2009.) But he also owns a Boeing jet as his personal aircraft.

During the transition between his election in 2016 and his inauguration last year, the president asked Boeing to come up with a less-expensive alternative to the F-35 fighter planes made by Lockheed Martin for the United States and more than a half-dozen allies. And he demanded a cut in the price of two new Boeing planes for use as Air Force One, the presidential jet.

While the president said in 2016 the two planes would cost an “out of control” $4 billion, a revised deal announced last month calls for the government to spend $3.9 billion. The White House then claimed the old deal would have cost $5.3 billion. Boeing said Trump “negotiated a good deal for the American people.”

— By Tim Mullaney, special to CNBC.com